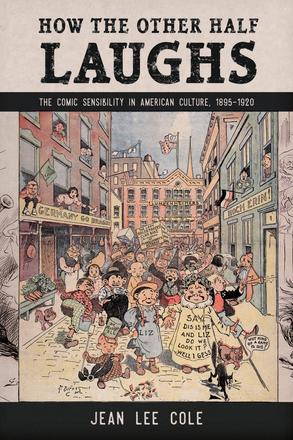 How the Other Half Laughs

Taking up the role of laughter in society, How the Other Half Laughs: The Comic Sensibility in American Culture, 1895–1920 examines an era in which the US population was becoming increasingly multiethnic and multiracial. Comic artists and writers, hoping to create works that would appeal to a diverse audience, had to formulate a method for making the “other half” laugh. In magazine fiction, vaudeville, and the comic strip, the oppressive conditions of the poor and the marginalized were portrayed unflinchingly, yet with a distinctly comic sensibility that grew out of caricature and ethnic humor.

Author Jean Lee Cole analyzes Progressive Era popular culture, providing a critical angle to approach visual and literary humor about ethnicity—how avenues of comedy serve as expressions of solidarity, commiseration, and empowerment. Cole’s argument centers on the comic sensibility, which she defines as a performative act that fosters feelings of solidarity and community among the marginalized.

Cole stresses the connections between the worlds of art, journalism, and literature and the people who produced them—including George Herriman, R. F. Outcault, Rudolph Dirks, Jimmy Swinnerton, George Luks, and William Glackens—and traces the form’s emergence in the pages of Joseph Pulitzer’s New York World and William Randolph Hearst’s Journal-American and how it influenced popular fiction, illustration, and art. How the Other Half Laughs restores the newspaper comic strip to its rightful place as a transformative element of American culture at the turn into the twentieth century.

"Over the course of the monograph, Cole crafts a compelling story about how comics artists and editors shaped the field, particularly via their responses to turn-of-the-century U. S. immigration and race relations. "

"Jean Lee Cole’s How the Other Half Laughs is an outstanding work in the field of American popular culture that focuses on the overall significance of humor and the rise of the comics and comic strips from the latter nineteenth century into the early twentieth century. In its impressive overview and incisive analysis, it adds immeasurably to the growing body of works on the subject. Every now and then, a book comes along that is a joy to read, an enhancer of knowledge and understanding. How the Other Half Laughs is one of those books. "

"How the Other Half Laughs helps remedy traditional treatments of this period that tend to oversimplify the complexity of ethnic humor and richness of immigrant cultures. Cole makes a significant contribution in making connections between magazines, newspapers, and the popular stage, and highlighting forgotten but significant artists. "

- Kerry D. Soper, professor at Brigham Young University and author of Gary Larson and “The Far Side”