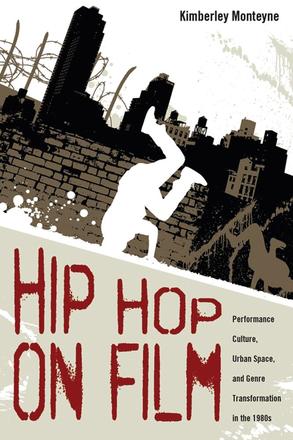 Performance Culture, Urban Space, and Genre Transformation in the 1980s

Early hip hop film musicals have either been expunged from cinema history or excoriated in brief passages by critics and other writers. Hip Hop on Film reclaims and reexamines productions such as Breakin' (1984), Beat Street (1984), and Krush Groove (1985) in order to illuminate Hollywood's fascinating efforts to incorporate this nascent urban culture into conventional narrative forms. Such films presented musical conventions against the backdrop of graffiti-splattered trains and abandoned tenements in urban communities of color, setting the stage for radical social and political transformations. Hip hop musicals are also part of the broader history of teen cinema, and films such as Charlie Ahearn's Wild Style (1983) are here examined alongside other contemporary youth-oriented productions. As suburban teen films banished parents and children to the margins of narrative action, hip hop musicals, by contrast, presented inclusive and unconventional filial groupings that included all members of the neighborhood. These alternative social configurations directly referenced specific urban social problems, which affected the stability of inner-city families following diminished governmental assistance in communities of color during the 1980s.

Breakdancing, a central element of hip hop musicals, is also reconsidered. It gained widespread acclaim at the same time that these films entered the theaters, but the nation's newly discovered dance form was embattled—caught between a multitude of institutional entities such as the ballet academy, advertising culture, and dance publications that vied to control its meaning, particularly in relation to delineations of gender. As street-trained breakers were enticed to join the world of professional ballet, this newly forged relationship was recast by dance promoters as a way to invigorate and “remasculinize” European dance, while young women simultaneously critiqued conventional masculinities through an appropriation of breakdance. These multiple and volatile histories influenced the first wave of hip hop films, and even structured the sleeper hit Flashdance (1983). This forgotten, ignored, and maligned cinema is not only an important aspect of hip hop history, but is also central to the histories of teen film, the postclassical musical, and even institutional dance. Kimberley Monteyne places these films within the wider context of their cultural antecedents and reconsiders the genre's influence.

"What happened to the American musical in the 1980s? It may have morphed, as some claim, into the pop-soundtrack-heavy Brat Pack movies, but no one was singing anymore. Even Footloose, Flashdance, and Dirty Dancing were strictly dance only. Where did the classic American musical go? One answer, argued by Kimberley Monteyne in her excellent book, Hip Hop on Film, is that the genre went underground.

Hip hop has been featured in movies for more than 30 years now, driving films such as Do the Right Thing, Boyz N the Hood, 8 Mile, and countless others, but Monteyne is drawn to a very specific cycle of films. Starting with Charlie Ahearn's drama-doc Wild Style (1983), she focuses on a handful of movies that surfaced with the breakdance craze of the mid-1980s. It's a niche group; only Wild Style and perhaps Beat Street (1984) are generally considered noteworthy, while the rest were mostly forgotten after their theatrical runs (though, apparently, 1984's Breakin' had better box office than that year's The Terminator). But Monteyne asserts that the cycle is a crucial missing gap in the history of urban African American cinema, more progressive than both the blaxploitation films that preceded them and the 1990s 'New Black Cinema' that followed.

Monteyne astutely broadens the discussion out from the hip hop movies into a wider consideration of 1980s movies, arguing that they offered a radically alternative image of youth culture. With scene after scene of black and Puerto Rican kids writing, breakdancing or making music, urban youth culture is depicted as positive and uniquely artistic. In contrast to the middle-class teens of, say, John Hughes's movies, the street breakers and rappers don't just consume pop culture, they are out there creating it. Monteyne also draws comparisons with classic Hollywood musicals, connecting the narrative tropes of Beat Street and Wild Style to old Gene Kelly and Fred Astaire movies. She illustrates how the structures of the earlier films are re-worked in the hip hop musicals, placing African American and Latino teenagers at the centre of their cinematic worlds.

The prose is intelligent, well researched (the pages on the riots that followed NYC screenings of Krush Groove are fascinating) and always eloquent. On the atrocious Razzie-nominated Body Rock (1984), for example, Monteyne accurately describes the film's cynical, exploitative nature, the irony in its preppy cast disdaining rappers who don't 'keep it real', and the Vanilla Ice-style play-acting of former soap star Lorenzo Lamas as 'Chilly D'. Maybe, just once, she could borrow a well-worn phrase from the hip hop lexicon: the movie is wack.

"The captivating origins and evolution of hip hop in cinema are skillfully illuminated by Monteyne through her effective studies of youth culture, musical and choreographic trends, and social conditions, especially in relation to race and class. Her perceptive evaluations of media industries and the milieu of modern African American arts provide an enlightening understanding to many expressive advances in recent years. This is a book written with assurance that will stimulate a great deal of progressive discussion. "

"Kimberley Monteyne has given life to a genre that most of us had forgotten. She has thoroughly explored the contexts in which hip hop films were made and received, and she has admirably applied a broad range of theoretical perspectives with clarity and precision. Highly recommended to anyone interested in the film musical, dance, popular music, critical race studies, and/or urban culture. "

- Ed Guerrero, author of Do the Right Thing and Framing Blackness: The African American Image in Film