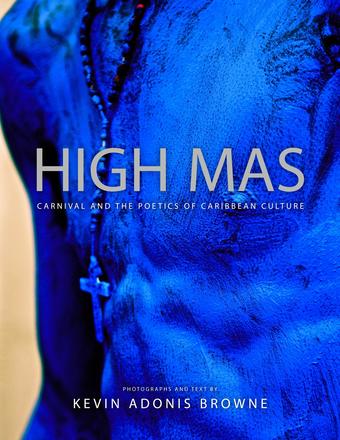 Carnival and the Poetics of Caribbean Culture

Overall Winner of the 2019 OCM Bocas Prize for Caribbean Literature

High Mas: Carnival and the Poetics of Caribbean Culture explores Caribbean identity through photography, criticism, and personal narrative. Taking a sophisticated and unapologetically subjective Caribbean point of view, the author delves into Mas—a key feature of Trinidad performance—as an emancipatory practice. The photographs and essays here immerse the viewer in carnival experience as never before. Kevin Adonis Browne divulges how performers are or wish to be perceived, along with how, as the photographer, he is implicated in that dynamic. The resulting interplay encourages an informed, nuanced approach to the imaging of contemporary Caribbeanness.

The first series, “Seeing Blue,” features Blue Devils from the village of Paramin, whose performances signify an important revision of the post-emancipation tradition of Jab Molassie (Molasses Devil) in Trinidad. The second series, “La Femme des Revenants,” chronicles the debut performance of Tracey Sankar’s La Diablesse, which reintroduced the “Caribbean femme fatale” to a new audience. The third series, “Moko Jumbies of the South,” looks at Stephanie Kanhai and Jonadiah Gonzales, a pair of stilt-walkers from the performance group Touch de Sky from San Fernando in southern Trinidad. “Jouvay Reprised,” the fourth series, follows the political activist group Jouvay Ayiti performing a Mas in the streets of Port of Spain on Emancipation Day in 2015.

Troubling the borders that persist between performer and audience, embodiment and spirituality, culture and self-consciousness, the book interrogates what audiences understand about the role of the participant-observer in public contexts. Representing the uneasy embrace of tradition in Trinidad and the Caribbean at large, the book probes the multiple dimensions of vernacular experience and their complementary cultural expressions. For Browne, Mas performance is an exquisite refusal to fully submit to the lingering traumas of slavery, the tyrannies of colonialism, and the myths of independence.

"The combination of interesting photographs and poetic reflections by the author carries the reader along and offers the reader a window on a unique aspect of Trinidadian culture. "

"Impressive in scope, lyrical in style, and innovative in form, High Mas impresses both as a work of literature and art. Browne’s exceptional exploration of Mas blends photographic essay, essay, memoir, poetry, polemic, and prose poetry to transformative effect. Going beyond the history and narrative, Browne peers into the soul of a people with whom he feels a deep kinship. The result is a radical, genre-defying tribute to a cherished tradition in the finest tradition of literary non-fiction. "

"Kevin Adonis Browne’s High Mas: Carnival and the Poetics of Caribbean Culture, is a one of a kind work that understands fundamentally all that is at stake when people make Mas—the embrace of their fierce unexpurgated beauty. The writing, and by that I mean both text and image, is as liquid as Mas itself catching the exquisite balancing of life here, life after, and life before which is ‘being’ in Mas. Mas is the body abstracted from the formal tyrannies of history and of the quotidian—not a fleeting or temporary state of performance but the production of an ongoing state of being; neither cosmetic nor decorative nor even dramatic but lodged in the existential, or as Browne might call it the rhetorical. Browne shows us everything about the permeable, uncanny habitations of these figures of Mas in his lucid images. This book is wise and field changing. "

"Lest we forget there was Mas (still is!), Kevin Adonis Browne reminds us of its crucial role in Caribbean culture and history. In this remarkable book, Browne turns his Caribbeanist photographic gaze on images of Mas present and past, too many taken for granted, too many in danger of being lost forever. Poet, visual artist, photographer, essayist, visionary, Browne warns us to pay attention to what we see and feel. This book with its riveting photographs and poetic prose is essential reading. It will open our eyes to what lies beneath the revelry of Mas. "

"Kevin Adonis Browne’s High Mas: Carnival and the Poetics of Caribbean Culture is a gorgeous rhetoric, a poetic, visually stunning, and necessary book. That it is a rhetoric is clear from Browne’s essays that theorize, meditate on, and historize Carnival. These essays explore memory, blindness and the problems of sight, composition, light, refusal, something like freedom and the practice of Caribbeanist photography. The subjects with whom he collaborates—those people who make Mas—inform and co-shape the photographic praxis that Browne elaborates in the essays and performs in the photos. A visual textual document of the present, High Mas leaves me breathless with the beauty of what we make, how, and under what conditions. "

- Christina Sharpe, professor of humanities at York University, Toronto, and author of Monstrous Intimacies: Making Post-Slavery Subjects and In the Wake: On Blackness and Being