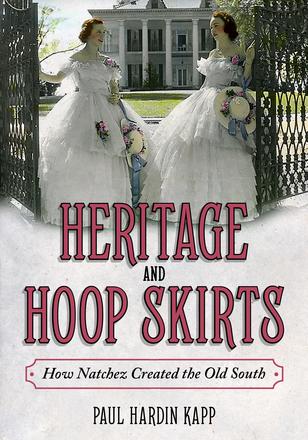 How Natchez Created the Old South

For over eighty years, tourists have flocked to Natchez, Mississippi, seeking the “Old South,” but what they encounter is invention: a pageant and rewrite of history first concocted during the Great Depression. In Heritage and Hoop Skirts: How Natchez Created the Old South, author Paul Hardin Kapp reveals how the women of the Natchez Garden Club saved their city, created one of the first cultural tourism economies in the United States, changed the Mississippi landscape through historic preservation, and fashioned elements of the Lost Cause into an industry.

Beginning with the first Natchez Spring Pilgrimage of Antebellum Homes in 1932, such women as Katherine Grafton Miller, Roane Fleming Byrnes, and Edith Wyatt Moore challenged the notion that smokestack industries were key to Natchez’s prosperity. These women developed a narrative of graceful living and aristocratic gentlepeople centered on grand but decaying mansions. In crafting this pageantry, they created a tourism magnet based on the antebellum architecture of Natchez. Through their determination and political guile, they enlisted New Deal programs, such as the WPA Writers’ Project and the Historic American Buildings Survey, to promote their version of the city.

Their work did save numerous historic buildings and employed both white and African American workers during the Depression. Still, the transformation of Natchez into a tourist draw came at a racial cost and further marginalized African American Natchezians. By attending to the history of preservation in Natchez, Kapp draws on a rich archive of images, architectural documents, and popular culture to explore how meaning is assigned to place and how meaning evolves over time. In showing how and why the Natchez buildings of the “Old South” were first preserved, commercialized, and transformed into a brand, this volume makes a much-needed contribution to ongoing debates over the meaning attached to cultural patrimony.

"Heritage and Hoop Skirts animates preservation conceptions with an engaging case study and good storytelling. The volume is very thoroughly researched, yet it is not cumbersome in conveying the facts. It takes theories from well-respected preservation thinkers and shows how these ideas are manifested in a specific place and over a period of time, shining light on the origin of the cultural tourism industry that we are familiar with today. "

Other Books By Paul Hardin Kapp 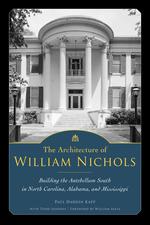 The Architecture of William Nichols