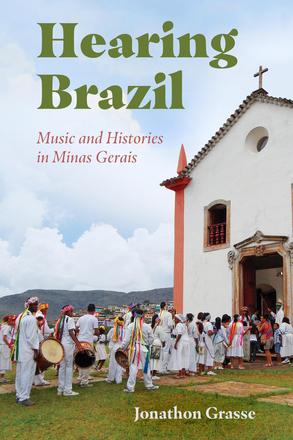 Music and Histories in Minas Gerais

A critical exploration of key musical legacies in the Brazilian state

Minas Gerais is a state in southeastern Brazil deeply connected to the nation’s slave past and home to many traditions related to the African diaspora. Addressing a wide range of traditions helping to define the region, ethnomusicologist Jonathon Grasse examines the complexity of Minas Gerais by exploring the intersections of its history, music, and culture.

Instruments, genres, social functions, and historical accounts are woven together to form a tapestry revealing a cultural territory’s development. The deep pool of Brazilian scholarship referenced in the book, with original translations by the author, cites over two hundred Portuguese-language publications focusing on Minas Gerais. This research was augmented by fieldwork, observations, and interviews completed over a twenty-five-year period and includes original photographs, many taken by the author.

Hearing Brazil: Music and Histories in Minas Gerais surveys the colonial past, the vast hinterland countryside, and the modern, twenty-first-century state capital of Belo Horizonte, the metropolitan region of which is today home to over six million. Diverse legacies are examined, including an Afro-Brazilian heritage, eighteenth- and nineteenth-century liturgical music of the region’s “Minas Baroque,” the instrument known as the viola, a musical profile of Belo Horizonte, and a study of the regionalist themes developed by the popular music collective the Clube da Esquina (Corner Club) led by Milton Nascimento with roots in the 1960s. Hearing Brazil champions the notion that Brazil’s unique role in the world is further illustrated by regionalist studies presenting details of musical culture.