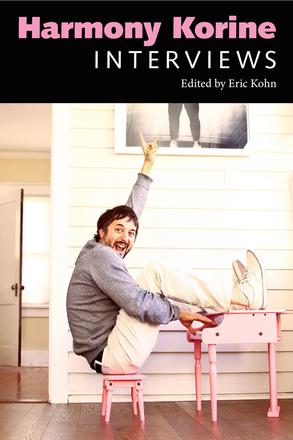 Bringing together interviews collected from over two decades, this unique chronicle includes rare interviews unavailable in print for years and an extensive, new conversation with one of the most prominent and yet subversive filmmakers in America

Harmony Korine: Interviews tracks filmmaker Korine's stunning rise, fall, and rise again through his own evolving voice. Bringing together interviews collected from over two decades, this unique chronicle includes rare interviews unavailable in print for years and an extensive, new conversation recorded at the filmmaker's home in Nashville.

After more than twenty years, Harmony Korine (b. 1973) remains one of the most prominent and yet subversive filmmakers in America. Ever since his entry into the independent film scene as the irrepressible prodigy who wrote the screenplay for Larry Clark's Kids in 1992, Korine has retained his stature as the ultimate cinematic provocateur. He both intelligently observes modern social milieus and simultaneously thumbs his nose at them. Now approaching middle age, and more influential than ever, Korine remains intentionally sensationalistic and ceaselessly creative.

He parlayed the success of Kids into directing the dreamy portrait of neglect, Gummo, two years later. With his audacious 1999 digital video drama Julien Donkey-Boy, Korine continued to demonstrate a penchant for fusing experimental, subversive interests with lyrical narrative techniques. Surviving an early career burnout, he resurfaced with a trifecta of insightful works that built on his earlier aesthetic leanings: a surprisingly delicate rumination on identity (Mister Lonely), a gritty quasi-diary film (Trash Humpers), and a blistering portrait of American hedonism (Spring Breakers), which yielded significant commercial success. Throughout his career he has also continued as a mixed-media artist whose fields included music videos, paintings, photography, publishing, songwriting, and performance art.