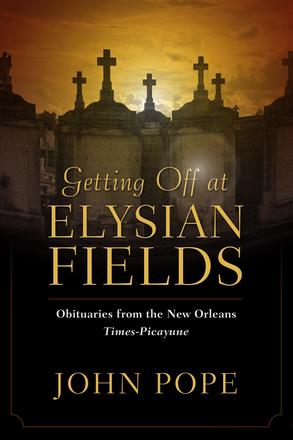 Getting Off at Elysian Fields

Obituaries from the New Orleans Times-Picayune

No city in America knows how to mark death with more funerary panache than New Orleans. The pageants commemorating departed citizens are often in themselves works of performance art. A grand obituary remains key to this Stygian passage. And no one writes them like New Orleanian John Pope. Collected here are not just simple, mindless recitations of schools and workplaces, marriages, and mourners bereft. These pieces in Getting Off at Elysian Fields are full-blooded life stories with accounts of great achievements, dubious dabblings, unavoidable foibles, relationships gone sour, and happenstances that turn out to be life-changing.

To be sure, there are stories about Carnival monarchs, great philanthropists, and a few politicians. But because New Orleans embraces eccentric behavior, there are stories of people who colored way outside the lines. For instance, there was the doctor who used his plasma to make his flowers grow, and the philanthropist who took money she had put aside for a fur coat to underwrite the lawsuit that desegregated Tulane University. A letter carrier everyone loved turned out to have been a spy during World War II, and a fledgling lawyer changed his lifelong thoughts about race when he saw blind people going into a Christmas party through separate doors--one for white people and another for African Americans. Then there was the punctilious judge who got down on his hands and knees to edge his lawn--with scissors.

Because New Orleans funerals are distinctive, the author includes accounts of four that he covered, complete with soulful singing and even some dancing. As a popular, local bumper sticker indisputably declares, "New Orleans--We Put the Fun in Funeral. "

My new definition of 'to die and go to heaven' is to have your obituary written by John Pope. He makes the dead come alive in perfect gems of brilliant reporting and beautiful writing that ultimately form a rich and highly original portrait of a city that (thank God) is like no other in America.

A charming and elegant salute to the dead. John Pope writes with grace, rendering the highlights of these lives in jewel-like biographical detail. What he has fashioned is a complex and layered narrative about the city of New Orleans recounted through the accomplishments of those who have given so freely of themselves over the past thirty-five years.

This collection of life stories is rich in character and culture, just like New Orleans. Taken together, these lives paint a picture of the times, highlighting key milestones of the twentieth century. The tales take us through storms and war, the struggle to dismantle segregation, and the fight against HIV/AIDS. You'll enjoy meeting the extraordinary people who left a mark on New Orleans--a mafia boss, literary giants, carnival royalty, public servants, and the city's taste makers.

Writing a well-crafted obituary blends the talents of a reporter and an historian. John Pope is a master of that subtle art and this sprightly collection of obituaries over four decades shows him at his best. In the process, the reader learns a great deal about New Orleans and its people. A stimulating and engaging introduction to the Big Easy.

- Lewis L. Gould, author of The Republicans: A History of the Grand Old Party

In this collection, the wonderful writer John Pope tells the story of modern New Orleans through his obituaries of the leaders and artists who shaped the city. A graceful writer and diligent reporter with a good heart, John has captured the essence of all these wonderful people.

John Pope knows New Orleans and its residents to a fare-thee-well. Getting Off at Elysian Fields presents a distinguished crowd of history makers and eccentrics--from a wartime-spy-turned-postal-worker, to a socialite who gave her fur coat money to help integrate a university, to the doctor who made it possible for Gary Cooper to star in High Noon. With each story, Pope reminds readers who and what the world has lost. He also reminds us why it's important to say hello to strangers. In this town, you never know who you'll meet.

- Gwen Thompkins, veteran reporter and editor at the Times-Picayune and host of the public radio program Music Inside Out

Jurists, Mardi Gras royalty, restaurateurs, mobsters, novelists, and French Quarter characters are brought to life in a collection of vividly detailed obituaries that do their subjects right while illuminating the past half century of New Orleans history. Writing on deadline, John Pope has delivered.

Pope has not written a traditional history of New Orleans . . . He has instead collected a series of his own death documents that seem to reveal the evolving nature of history through real time. Only in New Orleans could a writer do such a thing and have it turn into something fabulous.

Don't disrespect the lowly obit or its ink-stained writer. For in these pages, John Pope has written a history of twentieth-century New Orleans. The lives of these women and men not only shaped the city, but often influenced important events in the wider world. Herein you will meet with artists, AIDS activists, a spy, several chefs, an embalmer, a 'duck girl,' a 'black cat. ' In short a cast of characters that roughly reflects the cast of the ongoing show that is New Orleans. These obits tell the story of this city as well as or better than many a history book.