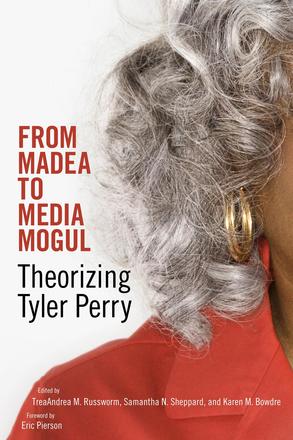 From Madea to Media Mogul

For over a decade, Tyler Perry has been a lightning rod for both criticism and praise. To some he is most widely known for his drag performances as Madea, a self-proclaimed "mad black woman," not afraid to brandish a gun or a scalding pot of grits. But to others who watch the film industry, he is the businessman who by age thirty-six had sold more than $100 million in tickets, $30 million in videos, $20 million in merchandise, and was producing 300 projects each year viewed by 35,000 every week.

Is the commercially successful African American actor, director, screenwriter, playwright, and producer "malt liquor for the masses," an "embarrassment to the race!," or is he a genius who has directed the most culturally significant American melodramas since Douglas Sirk? Are his films and television shows even melodramas, or are they conservative Christian diatribes, cheeky camp, or social satires? Do Perry's flattened narratives and character tropes irresponsibly collapse important social discourses into one-dimensional tales that affirm the notion of a "post-racial" society?

In light of these debates, From Madea to Media Mogul makes the argument that Tyler Perry must be understood as a figure at the nexus of converging factors, cultural events, and historical traditions. Contributors demonstrate how a critical engagement with Perry's work and media practices highlights a need for studies to grapple with developing theories and methods on disreputable media. These essays challenge value-judgment criticisms and offer new insights on the industrial and formal qualities of Perry's work.

"From Madea to Media Mogul is a necessary foundation for discussion about the Black cinematic experience within the confines of popular culture. Russworm, Sheppard, and Bowdre provide a timely collection in response to a lack of platforms for critical analysis. This important monograph addresses concern for the intricacy that is Black cinema, its future, and whose hands that future lies in."

"Russworm, Sheppard, and Bowdre offer a rigorous collection of well-timed essays on an underserved area of American cinema. From Madea to Media Mogul: Theorizing Tyler Perry is an engaging anthology that places industrial practices into dialogue with auteurist sensibilities and theoretical models. It enables scholars, students, and spectators to consider the complexities and contradictions embedded in African American culture and filmmaking."