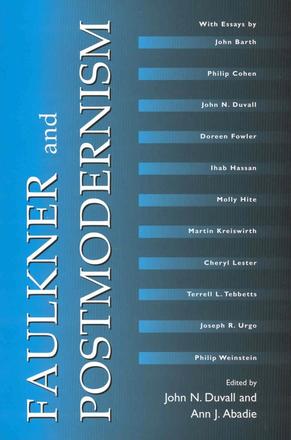 Where William Faulkner’s fiction stands in relation to that of Ellison, Pynchon, Nabokov, and other postmodern greats

Since the 1960s, William Faulkner, Mississippi's most famous author, has been recognized as a central figure of international modernism. But might Faulkner's fiction be understood in relation to Thomas Pynchon's Gravity's Rainbow as well as James Joyce's Ulysses?

In eleven essays from the 1999 Faulkner and Yoknapatawpha Conference, held at the University of Mississippi, Faulkner and Postmodernism examines William Faulkner and his fiction in light of postmodern literature, culture, and theory. The volume explores the variety of ways Faulkner's art can be used to measure similarities and differences between modernism and postmodernism.

Essays in the collection fall into three categories: those that use Faulkner's novels as a way to mark a period distinction between modernism and postmodernism, those that see postmodern tendencies in Faulkner's fiction, and those that read Faulkner through the lens of postmodern theory's contemporary legacy, the field of cultural studies.

In order to make their particular arguments, essays in the collection compare Faulkner to more contemporary novelists such as Ralph Ellison, Vladimir Nabokov, Thomas Pynchon, Walker Percy, Richard Ford, Toni Morrison, and Kathy Acker. But not all of the comparisons are to high-culture artists, since even Elvis Presley becomes Faulkner's foil in one of the essays.

A variety of theoretical perspectives frame the work in this volume, from Fredric Jameson's pessimistic sense of postmodernism's possibilities to Linda Hutcheon's conviction that cultural critique can continue in postmodernism through innovative new forms such as metafiction. Despite the different theoretical premises and distinct conclusions of the individual authors of these essays, Faulkner and Postmodernism proves once again that in the key debates surrounding twentieth-century fiction, Faulkner is a crucial figure.