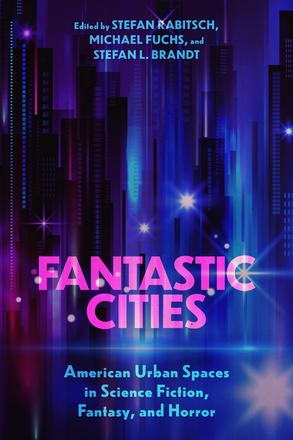 A critical exploration of fictional American cities in popular culture

Metropolis, Gotham City, Mega-City One, Panem’s Capitol, the Sprawl, Caprica City—American (and Americanized) urban environments have always been a part of the fantastic imagination. Fantastic Cities: American Urban Spaces in Science Fiction, Fantasy, and Horror focuses on the American city as a fantastic geography constrained neither by media nor rigid genre boundaries. Fantastic Cities builds on a mix of theoretical and methodological tools that are drawn from criticism of the fantastic, media studies, cultural studies, American studies, and urban studies.

Contributors explore cultural media across many platforms such as Christopher Nolan’s Dark Knight Trilogy, the Arkham Asylum video games, the 1935 movie serial The Phantom Empire, Kim Stanley Robinson’s fiction, Colson Whitehead’s novel Zone One, the vampire films Only Lovers Left Alive and A Girl Walks Home Alone at Night, Paolo Bacigalupi’s novel The Water Knife, some of Kenny Scharf’s videos, and Samuel Delany’s classic Dhalgren. Together, the contributions in Fantastic Cities demonstrate that the fantastic is able to “real-ize” that which is normally confined to the abstract, metaphorical, and/or subjective. Consequently, both utopian aspirations for and dystopian anxieties about the American city become literalized in the fantastic city.