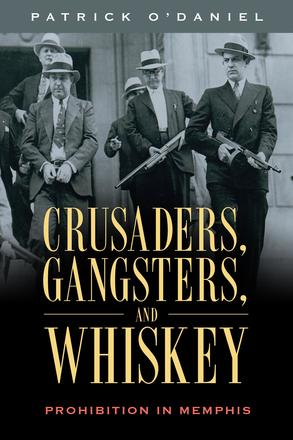 A lively, full history of Memphis during the Prohibition era

Prohibition, with all its crime, corruption, and cultural upheaval, ran its course after thirteen years in most of the rest of the country—but not in Memphis, where it lasted thirty years. Patrick O’Daniel takes a fresh look at those responsible for the rise and fall of Prohibition, its effect on Memphis, and the impact events in the city made on the rest of the state and country.

Prohibition remains perhaps the most important issue to affect Memphis after the Civil War. It affected politics, religion, crime, the economy, and health, along with race and class. In Memphis, bootlegging bore a particular character shaped by its urban environment and the rural background of the city’s inhabitants. Religious fundamentalists and the Ku Klux Klan supported Prohibition, while the rebellious youth of the Jazz Age fought against it. Poor and working-class people took the brunt of Prohibition, while the wealthy skirted the law. Like the War on Drugs today, African Americans, immigrants, and poor whites made easy targets for law enforcement due to their lack of resources and effective legal counsel.

Based on news reports and documents, O’Daniel’s lively account distills long-forgotten gangsters, criminal organizations, and crusaders whose actions shaped the character of Memphis well into the twentieth century.

"An impressive and valuable addition to the small library of Memphis histories has arrived in the form of Crusaders, Gangsters, and Whiskey: Prohibition in Memphis by Patrick O’Daniel. . . . This book should be on the shelf of everyone interested in Memphis and Mid-South history. "

"Patrick O’Daniel’s book is not only true crime, it is a virtual film noir in print with gangsters, bootleggers, cold-blooded killers, and corrupt officials bursting from the pages. O'Daniel's book brings to life gangsters, criminal organizations, and crusaders whose actions shaped the character of Memphis well into the twentieth century. With its brisk pace, Crusaders, Gangsters, and Whiskey is a lively, illuminating, and fascinating read. "

"Patrick O'Daniel, author of three other books on Memphis, has written the authoritative work on alcohol prohibition in the city. With richly descriptive and thoroughly researched episodes full of colorful characters, O'Daniel's micro-history brings to life the world of prohibitionist crusaders and gin-dealing gangsters in Memphis from 1909 to 1939. . . . O'Daniel's work is an unqualified success. "

"This book is the definitive work on Prohibition in Memphis, Tennessee. O’Daniel has impressively re-created scenes from this time through excellent descriptive detail, writing, and research. "

"Before O’Daniel’s Crusaders, Gangsters, and Whiskey: Prohibition in Memphis, we knew little of how the prohibition of alcohol affected the urban centers of the American South. With clear analysis and narrative skill, O’Daniel brings to life the colorful characters who tried to either enforce or evade the antiliquor laws of Tennessee and the United States. The story is a fascinating one, and we are fortunate that O’Daniel has turned his attention to such an important era in American history. "

"History well written is always an interesting narrative. When the story is about a half century of crime and vice in a city readers know, it becomes even more fascinating. This book will enchant all readers. Memphians will have particular delight in seeing familiar institutions and families active in a vastly different world which seems so far away and yet so near in memory. "