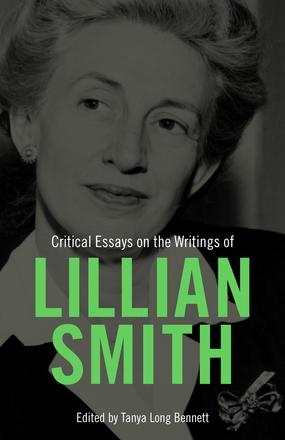 As a white woman of means living in segregated Georgia in the first half of the twentieth century, Lillian Smith (1897–1966) surprised readers with stories of mixed-race love affairs, mob attacks on “outsiders,” and young female campers exploring their sexuality.

Critical Essays on the Writings of Lillian Smith tracks the evolution of Smith from a young girls’ camp director into a courageous artist who could examine controversial topics frankly and critically while preserving a lifelong connection to the north Georgia mountains and people. She did not pull punches in her portrayals of the South and refused to obsess on an idealized past. Smith took seriously the artist’s role as she saw it—to lead readers toward a better understanding of themselves and a more fulfilling existence.

Smith’s perspective cut straight to the core of the neurotic behaviors she observed and participated in. To draw readers into her exploration of those behaviors, she created compelling stories, using carefully chosen literary techniques in powerful ways. With words as her medium, she drew maps of her fictionalized southern places, revealing literally and metaphorically society’s disfunctions. Through carefully crafted points of view, she offers readers an intimate glimpse into her own childhood as well as the psychological traumas that all southerners experience and help to perpetuate.

Comprised of seven essays by contemporary Smith scholars, this volume explores these fascinating aspects of Smith’s writings in an attempt to fill in the picture of this charismatic figure, whose work not only was influential in her time but also is profoundly relevant to ours.

"The essays succeed in illuminating Smith’s commitment to her artistic vision and her activism. . . . This solid reassessment has a place on the shelf of literature students and scholars of mid-century America. "

"Critical Essays on the Writings of Lillian Smith is the first book-length study to focus on Smith and the entirety of her work. Situating her artistically within the realm of southern letters by focusing on the artistry and rhetoric or her work instead of just on her social activism, this is a welcome addition to the scholarship on Smith, southern literature, southern history, and southern studies. "

"Lillian Smith has been valued for the powerful ways in which she turned a searchlight on the workings of white supremacy and southern demagoguery, but the contributors to Critical Essays on the Writings of Lillian Smith further emphasize Smith’s optimism that the South and the nation could change. "

"Critical Essays on the Writings of Lillian Smith addresses a real gap in scholarship on Lillian Smith: the paucity of work that emphasizes her literary achievement as much as her work as an activist. This is an important work of scholarly recovery. "