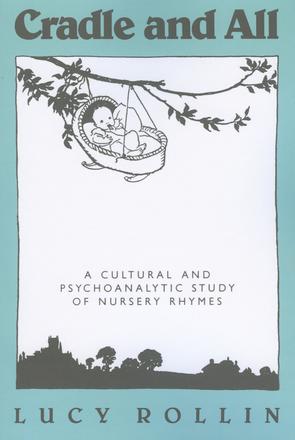 A Cultural and Psychoanalytic Study of Nursery Rhymes

From earliest childhood the nursery rhyme, one of the most captivating genres in our popular culture, has transmitted powerful messages to the child who hears it. These meanings may not be the ones adults perceive or intend, for such didactic precepts as the beneficial need of self-control, social order, and academic responsibility also can be weighted with the sadistic, angry connotations that lie deep in the human spirit.

In Cradle and All nursery rhymes are shown to be both the instruments that tell children of the mortal hunger for the forces in the natural world that oppose them. Thus in bearing a double load of meanings, nursery rhymes remove the blinders and push children toward the life of contrasts that abound in their culture.

This fascinating examination of the pervasive influence of nursery rhymes reveals patterns of psychological and cultural meaning in a broad range of rhymes, grouping them according to basic subject matter: animal rhymes, courtship and marriage rhymes, lullabies and amusements, and didactic rhymes.

Combining the tools of psychoanalysis, literary criticism, folklore studies, cultural history, and cultural anthropology, Cradle and All explores meanings and motives that lie deep in many rhymes that are the fundamental literature of the nursery. This illuminating study also assesses attempts to sanitize rhymes by removing elements that some deem as needlessly violent, antisocial, and sexist.

Cradle and Allis unique in its analytical treatment of a large number of rhymes grouped in broad subject areas. In its diverse and comprehensive approach it will appeal to all who enjoy the lore of childhood literature.