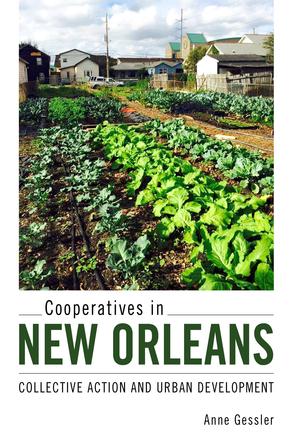 Cooperatives have been central to the development of New Orleans. Anne Gessler asserts that local cooperatives have reshaped its built environment by changing where people interact and with whom, helping them collapse social hierarchies and envision new political systems.

Gessler tracks many neighborhood cooperatives, spanning from the 1890s to the present, whose alliances with union, consumer, and social justice activists animated successive generations of regional networks and stimulated urban growth in New Orleans.

Cooperatives in New Orleans: Collective Action and Urban Development represents a new generation of scholarship in New Orleans’s history. Despite limited archival footprints and the clandestine nature of early cooperative movements, author Anne Gessler has given a voice to people who fought valiantly for economic survival and social equality for themselves and generations to come. As Gessler makes abundantly clear, a book on New Orleans’s cooperatives is long overdue.

In Cooperatives in New Orleans, author Anne Gessler demonstrates that working-class and poor people in New Orleans have not passively accepted economic policies that enriched wealthy elites at the expense of their own communities. Instead, they engaged in various forms of cooperative endeavors that attempted to secure a fairer distribution of resources, enhance democratic participation, and provide working people with a voice in policy making.