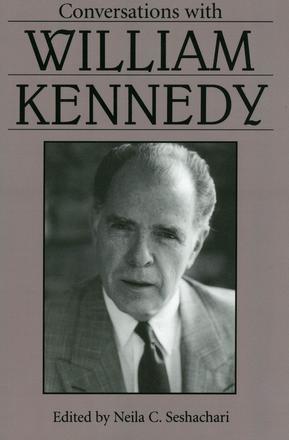 Interviews with the author of Ironweed and Legs

To read these interviews given between 1969 and 1996 is to gain insights into William Kennedy's high seriousness in pursuing the craft of fiction and to witness the artistic growth of this remarkable writer. The twenty-four interviews in this collection reveal how the opportunities and challenges in Kennedy's writing life parallel those other contemporary writers have faced in the last years of the century.

"The high drama of imagined worlds," he says, "becomes a Rosetta Stone, the key that unlocks the very real mysteries and complexities of our daily lives. "

"You're inventing out of a confluence of known facts and random ideas," he says about the process of writing, "juxtaposing reality and abstractions, and then wham! You've got something brand new in your head, and on the page. You're functioning on a plane of existence you didn't know was possible. That's creation, and it's profound pleasure. It's what you live for. "

Readers of these interviews will be privy to another process as well, the arduous but exciting process by which Kennedy has emerged as a major voice in contemporary letters. His meteoric rise to fame in 1983 and his continuing popularity since are the stuff of drama and folklore. In that year his novel Ironweed, rejected earlier by thirteen publishers, was finally published by Viking. It earned him a MacArthur Award, the New York Book Critics Circle Award, and a Pulitzer Prize. Governor Mario Cuomo honored him with the New York State Governor's Arts Award and declared that in Kennedy "Albany [had] found its Homer. " Hollywood came calling and secured screen rights to Ironweed, Legs, and Billy Phelan's Greatest Game. With Francis Ford Coppola, Kennedy co-wrote the screenplay of The Cotton Club.

The career that lifted off with such dramatic momentum has shown no signs of flagging. With steady regularity, Kennedy continues to add to his Albany Cycle of novels, as he experiments boldly with the craft of fiction.