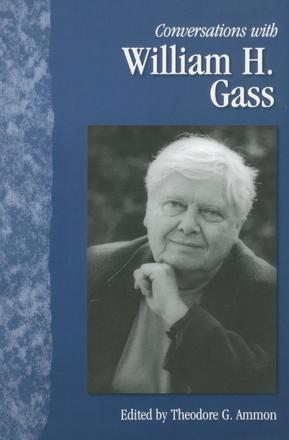 Interviews with the author of Omensetter's Luck and The Tunnel

Conversations with William H. Gass captures the imagination and philosophical acumen of one of America's most important aestheticians, critical theorists, fiction writers, and essayists.

From his first major novel, Omensetter's Luck (1966), to his numerous collections of essays and philosophical inquiries, to his controversial novel The Tunnel (1995), Gass (b. 1924) has proved himself a meticulous craftsman. Throughout these interviews, he reveals an aesthetic that combines ideas from sources as disparate as Ludwig Wittgenstein, Rainer Maria Rilke, Gertrude Stein, and Plato.

The interviews make clear the unity behind Gass's views is by his own design. Conversations retrace his undergraduate years at Kenyon College and his subsequent philosophical investigation of metaphor at Cornell University.

n interviews, in profiles, and in his own essays, Gass does not hide from questions about his art and personal motivations, no matter how frequently they are asked, nor does he toy with his interviewers. Revealing how he never shies from an intellectual joust, this collection includes a rousing, contentious debate with John Gardner, fellow literary pundit and fiction writer.

The distinction of Gass's prose is matched by the clarity and brilliance of the mind behind it. These talks allow an unobstructed view. Anyone interested in Gass's writing will delight in hearing the brutally honest voice of the mind that produced it.