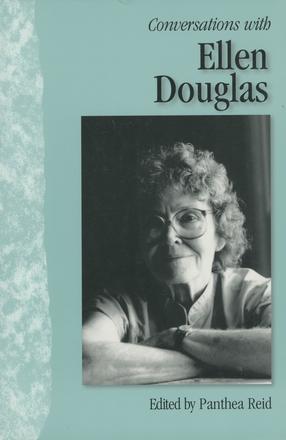 Interviews with the author of A Family's Affairs, Black Cloud, White Cloud, and Where the Dreams Cross

This collection of interviews from three decades features one of the South's most prominent contemporary writers, one of America's most dazzling practitioners of postmodern fiction.

From the early sixties, when she published the award-winning A Family's Affairs, to the late nineties and the publication of Truth: Four Stories I Am Finally Old Enough to Tell, Ellen Douglas has written novels, short stories, essays, and a book of fairy tales.

These conversations with Douglas reveal her earthy frankness and her disdain for "portentous declaration. " In them, just as in her fiction, she expresses her love of people, language, and stories, her constant moral values, her inclusive compassion, her deeply felt obligations to others, and her keen sense of humor. She explains that "comedy is as serious as tragedy -- it's just funnier. " Because she is an excellent, candid conversationalist, her light touch with "portentous" matters makes these interviews both dead serious and very funny.

The first is with Hodding Carter III, who in 1971 was a young journalist and family friend from Greenville, Mississippi, the town where Douglas was living and rearing three sons. Carter is among her early interviewers who explore the mystique of the southern writer and the southern climate for literature. Douglas's string of new novels took her work forward into civil rights, women's roles, and questions about the institutions of family and marriage. The conversations illuminate this shift from southern tradition to concern over contemporary issues. Arranged chronologically, the interviews testify to the growth of Douglas's narrative sensibility and to the profound use of allusions in her work. As she discusses A Family's Affairs; Black Cloud, White Cloud; Where the Dreams Cross; Apostles of Light; The Rock Cried Out; A Lifetime Burning; The Magic Carpet and Other Tales; Can't Quit You, Baby; and Truth, her remarks exhibit a consistent concern with technique and craftsmanship, for which she is much admired.

Of these sixteen interviews ten originally appeared in print between 1971 and 1999. Six have never before been published. Resurrecting lost material and exploring new insights, this collection offers the only comprehensive introduction to Douglas's lasting body of powerful work. It also provides the tools for the in-depth studies of her art which are sure to follow.