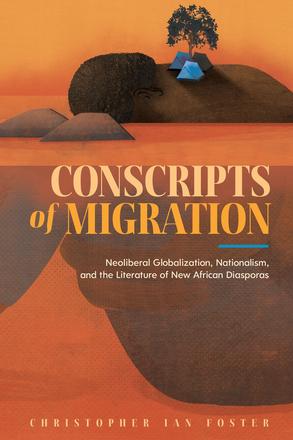 Neoliberal Globalization, Nationalism, and the Literature of New African Diasporas

The first full-length study of migritude literature as it intersects with postcolonial, black diaspora, and women's studies

In Conscripts of Migration: Neoliberal Globalization, Nationalism, and the Literature of New African Diasporas, author Christopher Ian Foster analyzes increasingly urgent questions regarding crises of global immigration by redefining migration in terms of conscription and by studying contemporary literature. Reporting on immigration, whether liberal or conservative, popular or scholarly, leaves out the history in which the Global North helped create outward migration in the Global South. From histories of racial capitalism, the trans-Atlantic slave trade, and imperialism to contemporary neoliberal globalization and the resurgence of xenophobic nationalism, countries in the Global North continue to devastate and destabilize the Global South. Britain, France, Italy, and the United States, in different ways, police the effects of their own global policies at their borders.

Foster provides a substantial study of a new body of contemporary African diasporic literature called migritude literature. Migritude indicates the work and ideas of a disparate yet distinct group of younger African authors born after independence in the 1960s. Most often migritude authors have lived both in and outside Africa and narrate the experiences of migration under the pressures of globalization. They also emphasize that immigration itself and stereotypes of the immigrant are entangled with the history of colonialism. Authors like Fatou Diome, Shailja Patel, Abdourahman Waberi, Cristina Ali Farah, and others confront critical issues of migrancy, diaspora, departure, return, racism, identity, gender, sexuality, and postcoloniality.

Christopher Ian Foster’s expansive study of the entangled roots of modernity, nationalism, globalization, and migration astutely illuminates how these systems are (con)scripted, structured, steered, and (im)mobilized by a long history of colonialism. His book is a judicious, timely intervention in contemporary debates of migration that is particularly attentive to North-South disparities in freedom of movement and to subaltern, female, and queer subjects in cross-disciplinary and multilingual African diasporic frameworks.

- Supriya Nair, professor of English at University of Michigan–Ann Arbor

Through a groundbreaking and insightful reading of contemporary African diasporic literatures by Francophone and Anglophone writers, Christopher Ian Foster compellingly argues that migration out of the Global South is best understood as conscription. Foster delivers a lucid and trenchant analysis of neoliberal globalization that connects the dots with histories of racial capitalism, namely the trans-Atlantic slave trade and imperialism. Conscripts of Migration both models and theorizes a new approach to so-called immigrant literatures, in addition to bringing to visibility a new wave of well- and lesser-known African diasporic writers.

- Ayo A. Coly, professor of comparative literature at Dartmouth College and author of Postcolonial Hauntologies: African Women’s Discourses of the Female Body