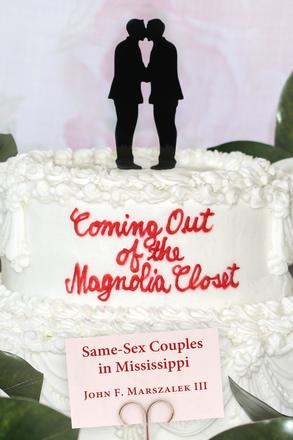 Coming Out of the Magnolia Closet

In Coming Out of the Magnolia Closet: Same-Sex Couples in Mississippi, John F. Marszalek III shares conversations with same-sex couples living in small-town and rural Mississippi. In the first book of its kind to focus on Mississippi, couples tell their stories of how they met and fell in love, their decisions on whether or not to marry, and their experiences as sexual minorities with their neighbors, families, and churches. Their stories illuminate a complicated relationship between many same-sex couples and their communities, influenced by southern culture, religion, and family norms.

As Marszalek guides readers into the homes of diverse same-sex couples, he weaves in his own story of meeting his husband and living as a married gay man in Mississippi. Both the couples and he explain why they remain in one of the most conservative states in the country rather than moving to a place with a large, vibrant gay community.

In addition to sharing his own experiences, Marszalek reviews the literature on the topic, including writings from southern and rural queer studies, history, sociology, and psychology, to explain how the couples’ relationships and experiences compare to those of same-sex couples in other areas and times. Consequently, Coming Out of the Magnolia Closet is written for both the scholar of southern and queer studies and for anyone interested in learning about the experiences of same-sex couples.

"Coming Out of the Magnolia Closet is situated for all readers to be inspired by the personal stories of both heartbreak and triumph, while the title also serves as an essential text for the scholarly community as well. This title is highly recommended for academic, public, and personal libraries for those seeking an uplifting and inspiring, yet honest glimpse into the lives of sexual minorities of Mississippi or anyone interested in learning about the experiences of same-sex couples living in the Deep South. "

"What a revelation! Mississippi’s same-sex couples speak out, defy homophobia, and find fulfillment in community, family, and spirituality. With expert insight, Dr. Marszalek explains how they meet, whether they wed, and why they stay in our poor conservative state. Write your legislator, tell the pastor, and give copies to friends. This trailblazing study is a must-read. "

"I love, love, love this book. It feels like a conversation that the reader has been brought into, which I think is one of the strengths of the book. Academic and popular audiences will connect with these narrators, and they will feel more like friends by the end. This highly accessible work cuts across disciplinary boundaries to answer questions about where the queer South has been and where it is going. "

"Dr. John Marszalek tells a powerful story of courage and overcoming stereotypes and innate prejudices that lie embedded within southern culture. I was moved by the depth of his insightful compassion. This book will appeal to a wide audience, one that is both academic and general, and is a bulwark of hope that reaches beyond the LGBT community to serve as an inspiration to us all. "

- Deborah Johnson, author of The Secret of Magic, winner of the Harper Lee Prize for Legal Fiction, and The Air Between Us

"Dr. John Marszalek weaves his own journey with that of the couples whose stories he tells to explore complex topics of religion, family, and, ultimately, the choice to survive and thrive in a region where the Deep South’s societal codes change at a glacial pace. Readers will find themselves inspired by the courage of these Mississippians and the love they have for a state that prides itself on hospitality and tradition, while at the same time heartbroken by the common themes of silencing and rejection that are the reality for many. This is an indispensable queer study of the nuanced and multilayered stories of rural southern resilience. "

- Dr. Stacee Reicherzer, author of Healing Otherness: Break the Rules of Fear Caused by Childhood Rejection and Bullying to Find Empowerment in Your Difference