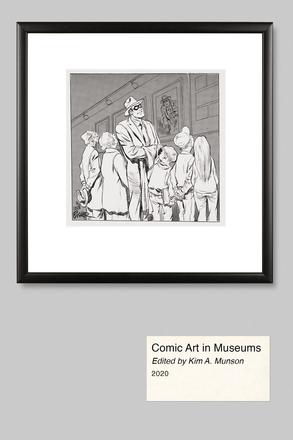 Edited by Kim A. Munson

Through essays and interviews, Kim A. Munson’s anthology tells the story of the over-thirty-year history of the artists, art critics, collectors, curators, journalists, and academics who championed the serious study of comics, the trends and controversies that produced institutional interest in comics, and the wax and wane and then return of comic art in museums.

Audiences have enjoyed displays of comic art in museums as early as 1930. In the mid-1960s, after a period when most representational and commercial art was shunned, comic art began a gradual return to art museums as curators responded to the appropriation of comics characters and iconography by such famous pop artists as Andy Warhol and Roy Lichtenstein. From the first-known exhibit to show comics in art historical context in 1942 to the evolution of manga exhibitions in Japan, this volume regards exhibitions both in the United States and internationally.

With over eighty images and thoughtful essays by Denis Kitchen, Brian Walker, Andrei Molotiu, Paul Gravett, Art Spiegelman, Trina Robbins, and Charles Hatfield, among others, this anthology shows how exhibitions expanded the public dialogue about comic art and our expectation of “good art”—displaying how dedicated artists, collectors, fans, and curators advanced comics from a frequently censored low-art medium to a respected art form celebrated worldwide.

"In this collection, Munson takes us inside the courtroom of the museum where, to paraphrase Bob Dylan, the nature of art is on trial. Valuable for both fans and academics alike, this collection provides the groundwork for debate in future graduate and undergraduate courses on sequential art, museum studies, and art history. "