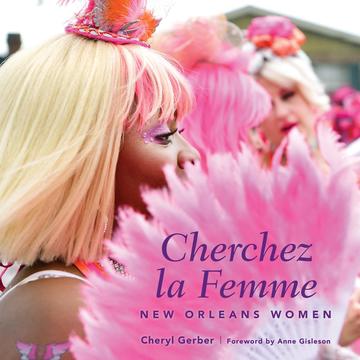 Alongside Gerber’s photographs are twelve essays written by female writers about such women as Leah Chase, Irma Thomas, Mignon Faget, and Trixie Minx. Also featured are prominent groups of women that have made their mark on the city, like the Mardi Gras Indians, Baby Dolls, and the Krewe of Muses, among others. The book is divided into eleven chapters, each celebrating the women who add to New Orleans’s uniqueness, including entertainers, socialites, activists, musicians, chefs, entrepreneurs, spiritual leaders, and burlesque artists.

In her new book, Cherchez la Femme (French for “Look for the Woman”), Gerber focuses her lens on the more uplifting aspects of sisterhood and solidarity in a 200-plus-page celebration of women around the city.

I am so moved by this book. Cheryl Gerber has spent a lifetime capturing the visual of what makes New Orleans so unique. With this book and the words of the best female writers of our time, she has captured its heart and soul. It is about the power of New Orleans women from the Ursuline nuns to the joyful women marching in the streets today. For three hundred years women have made the difference. This work gives me great hope for the future.

It’s hardly surprising that eclectic New Orleans would be home to some of the country’s most colorful, innovative women. But never before has a collection of this magnitude and creativity been assembled, showcasing what those of us born to New Orleans have always known, that this crazy city in a bend of the Mississippi River produces remarkable women, from community leaders to voodoo priestesses. Merci to photographer-author Cheryl Gerber for this overdue and beautiful homage.

Cherchez la Femme hits all the right notes in that ongoing ballad of New Orleans women and their stories.