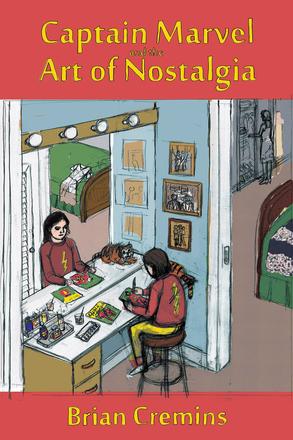 Captain Marvel and the Art of Nostalgia

The marvelous story of innovators C. C. Beck and Otto Binder and their mighty American hero

Billy Batson discovers a secret in a forgotten subway tunnel. There the young man meets a wizard who offers a precious gift: a magic word that will transform the newsboy into a hero. When Billy says, "Shazam!," he becomes Captain Marvel, the World's Mightiest Mortal, one of the most popular comic book characters of the 1940s. This book tells the story of that hero and the writers and artists who created his magical adventures.

The saga of Captain Marvel is also that of artist C. C. Beck and writer Otto Binder, one of the most innovative and prolific creative teams working during the Golden Age of comics in the United States. While Beck was the technician and meticulous craftsman, Binder contributed the still, human voice at the heart of Billy's adventures. Later in his career, Beck, like his friend and colleague Will Eisner, developed a theory of comic art expressed in numerous articles, essays, and interviews. A decade after Fawcett Publications settled a copyright infringement lawsuit with Superman's publisher, Beck and Binder became legendary, celebrated figures in comic book fandom of the 1960s.

What Beck, Binder, and their readers share in common is a fascination with nostalgia, which has shaped the history of comics and comics scholarship in the United States. Billy Batson's America, with its cartoon villains and talking tigers, remains a living archive of childhood memories, so precious but elusive, as strange and mysterious as the boy's first visit to the subway tunnel. Taking cues from Beck's theories of art and from the growing field of memory studies, Captain Marvel and the Art of Nostalgia explains why we read comics and, more significantly, how we remember them and the America that dreamed them up in the first place.

Meticulously researched and superbly written, Captain Marvel and the Art of Nostalgia tells the story of the Golden Age of Comics through one of its most controversial superheroes. Brian Cremins demonstrates how the evolution of Fawcett's Captain Marvel, including companions Mr. Tawny and Steamboat, can greatly expand our understanding of C. C. Beck and Otto Binder's creative choices, but he doesn't stop there. Drawing upon Beck's unpublished critical essays and other rare materials, Cremins asks larger questions about the superhero genre's origins, about realism and ideology in depictions of World War II, and about the limits of racial imagination in early American comics. Above all, Cremins emphasizes that the dreams of Billy Batson are an unprecedented collaborative effort, not simply between writers, artists, and editors, but also with scores of readers who helped to steer the content in the 1940s and who determine the way Captain Marvel is remembered today.

- Qiana J. Whitted, coeditor of Comics and the U.S. South and author of "A God of Justice?" The Problem of Evil in Twentieth-Century Black Literature

Brian Cremins's new book is a marvel: written with keen insight into the subtleties of comics form and careful attention to the complexities of comics history, it is an original, illuminating, and even moving meditation on the place of memory and nostalgia in comics studies and in American culture.

- Brannon Costello, coeditor of Comics and the U.S. South and editor of Howard Chaykin: Conversations