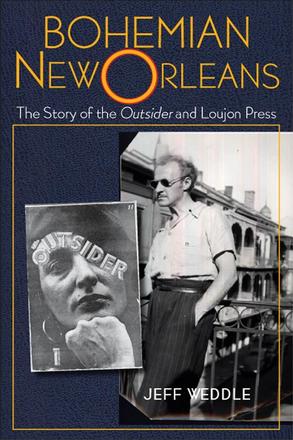 The Story of the Outsider and Loujon Press

Winner of the 2007 Welty Prize

In 1960, Jon Edgar and Louise “Gypsy Lou” Webb founded Loujon Press on Royal Street in New Orleans’s French Quarter. The small publishing house quickly became a giant. Heralded by the Village Voice and the New York Times as one of the best of its day, the Outsider, the press’s literary review, featured, among others, Charles Bukowski, Allen Ginsberg, Lawrence Ferlinghetti, Robert Creeley, Denise Levertov, and Walter Lowenfels. Loujon published books by Henry Miller and two early poetry collections by Bukowski.

Bohemian New Orleans traces the development of this courageous imprint and examines its place within the small press revolution of the 1960s.

Drawing on correspondence from many who were published in the Outsider, back issues of the Outsider, contemporary reviews, promotional materials, and interviews, Jeff Weddle shows how the press’s mandarin insistence on production quality and its eclectic editorial taste made its work nonpareil among peers in the underground. Throughout, Bohemian New Orleans reveals the messy, complex, and vagabond spirit of a lost literary age.

"Weddle . . . has written an excellent book. He is one of the few to capture the underside of New Orleans life with its fervor, trials, triumphs, and disappointments. . . . For anyone who would hope to understand the Crescent City’s literary underground and a partial complement of its diverse denizens during the 1960s, Bohemian New Orleans is a vital contribution. "

"This truly is a remarkable book that will appeal to fans of 1960s literati in America and the small presses who published them. Most importantly, however, Bohemian New Orleans serves as an homage to New Orleans itself, and brings to light the story of Jon and Louise Webb, who risked everything for each other and for the love of their art. "

"The story of the Outsider and Loujon Press is exhilarating and even inspirational, with Jon Webb’s indomitable belief in literature as a means of life setting a standard for true believers. Yet an undeniable sense of tragedy weaves throughout this book, because the real cost of art is always immeasurable. "

"Bohemian New Orleans is well researched and informative, yet intimate and charming. Before coming to the creation of the press and magazine that made the Webbs famous, we are taken through their lives separate and together, but always fascinating and romantic in the face of constant and almost comical hardship. The introduction takes us through the history of the small press and of the underground literary magazines that began with the modernists, stumbled in forties, and flourished post-war with the Beats and the ‘mimeograph revolution’. . . . Weddle presents these unique characters beautifully, using their story to weave the history of magazines, and then of New Orleans. "

"As Edwin Blair, the Webbs’ longtime friend, collector, and supporter, told Weddle, ‘This was a romantic couple. This was La Bohème, people giving up everything for art. ’ It is also a great and important New Orleans story that has found, in Jeff Weddle, a worthy chronicler and champion. "

"Bohemian New Orleans: The Story of the ‘Outsider’ and Loujon Press is a muted trumpet-moan, a woeful but quietly triumphant wail about a now-forgotten literary mag (the Outsider) and its struggling mimeograph-era publisher, Loujon Press. Get your kicks with Jon and Louise ‘Gypsy Lou’ Webb—bohemians themselves, outsiders both—as they dream, shock, and heroically toil for Art through ‘Beat-generation’ New Orleans in the 1940s, ’50s, and ’60s. "