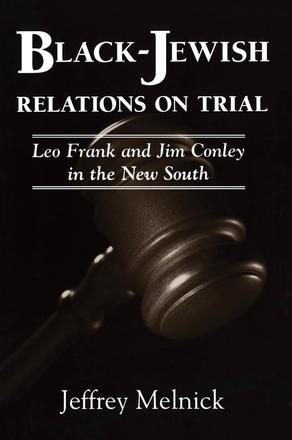 Leo Frank and Jim Conley in the New South

In 1915 Leo Frank, a northern Jew, was lynched in Georgia. He had been convicted of the murder of Mary Phagan, a young white woman who worked in the Atlanta pencil factory managed by Frank. In a tumultuous trial in 1913 Frank's main accuser was Jim Conley, an African American employee in the factory. Was Frank guilty?

In our time a martyr's aura falls over Frank as a victim of religious and regional bigotry. The unending controversy has inspired debates, movies, books, songs, and theatrical productions. Among the creative works focused on the case are a ballad by Fiddlin' John Carson, David Mamet's novel The Old Religion in 1997, and Alfred Uhry and Jason Robert Brown's musical Parade in 1998.

Indeed, the Frank case has become a touchstone in the history of black-Jewish cultural relations. However, for too long the trial has been oversimplified as the moment when Jews recognized their vulnerability in America and began to make common cause with African Americans.

This study has a different tale to tell. It casts off old political and cultural baggage in order to assess the cultural context of Frank's trial, and to examine the stress placed on the relationship of African Americans and Jews by it. The interpretation offered here is based on deep archival research, analyses of the court records, and study of various artistic creations inspired by the case. It suggests that the case should be understood as providing conclusive early evidence of the deep mutual distrust between African Americans and Jews, a distrust that has been skillfully and cynically manipulated by powerful white people.

Black-Jewish Relations on Trial is concerned less with what actually happened in the National Pencil Company factory than with how Frank's trial, conviction, and lynching have been used as an occasion to explore black-Jewish relations and the New South. Just as with the O. J. Simpson trial, the Frank trial requires that Americans make a profound examination of their essential beliefs about race, sexuality, and power.