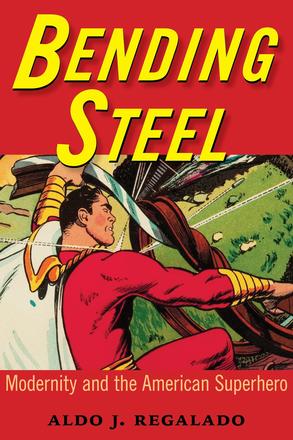 Modernity and the American Superhero

How superheroes grappled with industrialism, modernism, and capitalism

“Faster than a speeding bullet. More powerful than a locomotive. Able to leap tall buildings in a single bound . . . It’s Superman!” Bending Steel examines the historical origins and cultural significance of Superman and his fellow American crusaders. Cultural historian Aldo J. Regalado asserts that the superhero seems a direct response to modernity, often fighting the interrelated processes of industrialization, urbanization, immigration, and capitalism that transformed the United States from the early nineteenth century to the present. Reeling from these exciting but rapid and destabilizing forces, Americans turned to heroic fiction as a means of explaining national and personal identities to themselves and to the world. In so doing, they created characters and stories that sometimes affirmed, but other times subverted conventional notions of race, class, gender, and nationalism.

The cultural conversation articulated through the nation’s early heroic fiction eventually led to a new heroic type—the brightly clad, super-powered, pro-social action heroes that first appeared in American comic books starting in the late 1930s. Although indelibly shaped by the Great Depression and World War II sensibilities of the second-generation immigrants most responsible for their creation, comic book superheroes remain a mainstay of American popular culture.

Tracing superhero fiction all the way back to the nineteenth century, Regalado firmly bases his analysis of dime novels, pulp fiction, and comics in historical, biographical, and reader response sources. He explores the roles played by creators, producers, and consumers in crafting superhero fiction, ultimately concluding that these narratives are essential for understanding vital trajectories in American culture.

"Bending Steel is an insightful volume that reads like a synthesis of two decades of scholarship on superhero comics. . . . Regalado’s fine book is a welcome addition to superheroism scholarship and deserves a wide readership. "

"Aldo Regalado offers fresh insight into the origins of the American superhero. In particular he traces how the interconnected racial and gendered concerns embodied in superheroes played out in the early years of comic books. The depth of scholarship and the quality of writing are top notch and this will be a go-to work for scholars in the field. "

- Ian Gordon, associate professor of history at the National University of Singapore, author of Comic Strips and Consumer Culture, and coeditor of Film and Comic Books, published by University Press of Mississippi

"Much discussion of the superhero figure focuses on what superheroes are, who wrote, drew, published, and read them, when and where, and even how the market, legal, and cultural conditions of the New York publishing world laid the groundwork for the creation of the superhero genre, but rarely do scholars address the most difficult question of why the superhero arose specifically in late Depression-era urban America. Regalado's answer--a response to modernism and the superhero's ongoing engagement with the changing nature of modernism and postmodernism in America--presents a cogent, deeply sensible, and convincing answer. Regalado takes into account consumers, creators, and producers of superhero comics and the conversation between them that shaped the genre's ongoing response to modernism and its changes and discontents. This work is ever sensitive to the humanity, needs, drives, and concerns of those involved in the production and consumption of superhero narratives. "

"It's the scholar's appraisal of comics fandom and the new misanthropy of today's corporate comics that really hits hard. When he concludes, 'Run by relatively small companies and intimately tied to fan communities, superheroes were arguably more connected to their consumers for much of their publications histories,' readers will be left mulling an important issue: Are today's mainstream comics, stepped in progressive values yet more violent and cynical than ever, truly more subversive than yesterday's white patriarchal products? The answer is rewardingly complex thanks to Bending Steel. "