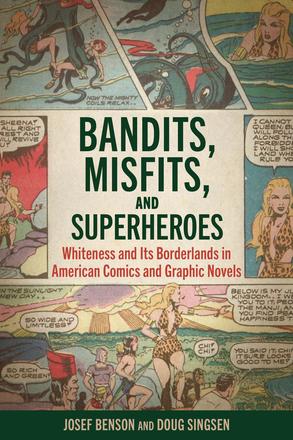 Whiteness and Its Borderlands in American Comics and Graphic Novels

American comics from the start have reflected the white supremacist culture out of which they arose. Superheroes and comic books in general are products of whiteness, and both signal and hide its presence. Even when comics creators and publishers sought to advance an antiracist agenda, their attempts were often undermined by a lack of awareness of their own whiteness and the ideological baggage that goes along with it. Even the most celebrated figures of the industry, such as Jerry Siegel and Joe Shuster, Jack Jackson, William Gaines, Stan Lee, Robert Crumb, Will Eisner, and Frank Miller, have not been able to distance themselves from the problematic racism embedded in their narratives despite their intentions or explanations.

Bandits, Misfits, and Superheroes: Whiteness and Its Borderlands in American Comics and Graphic Novels provides a sober assessment of these creators and their role in perpetuating racism throughout the history of comics. Josef Benson and Doug Singsen identify how whiteness has been defined, transformed, and occasionally undermined over the course of eighty years in comics and in many genres, including westerns, horror, crime, funny animal, underground comix, autobiography, literary fiction, and historical fiction. This exciting and groundbreaking book assesses industry giants, highlights some of the most important episodes in American comic book history, and demonstrates how they relate to one another and form a larger pattern, in unexpected and surprising ways.

"Providing a history of whiteness in American comics from the 1930s to the present, Bandits, Misfits, and Superheroes: Whiteness and Its Borderlands in American Comics and Graphic Novels brings attention to the hidden racial hierarchy that has shaped comics. This timely volume—which looks at everything from early superhero comics to jungle comics of the 1940s and 1950s, underground and alternative comix hits from the 1960s to today, and more recent diverse superhero comics—offers an account of whiteness and white supremacy as the structuring agent of racial inequality in comics that has gone almost completely unexplored. "