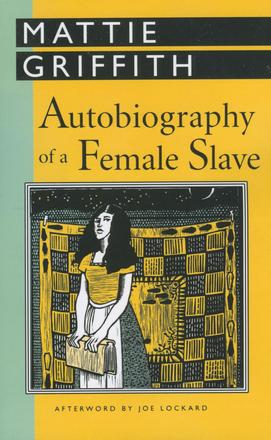 Autobiography of a Female Slave

In a new printing, a pseudo-slave narrative published in 1856 to impel the cause of abolition

"The first lick from Mr. Peterkin laid my back open. I writhed, I wrestled; but blow after blow descended, each harder than the preceding one. I shrieked, I screamed, I pleaded, I prayed, but here no mercy shown me. Mr. Peterkin having fully gratified and quenched his spleen, turned to Mr. Jones and said 'Now is yer turn; you can beat her as much as you please, only jist leave a bit o'life in her, is all I cares for. ' " In the pages of this putative autobiography the author poses as a slave for the purpose of bringing attention to the injustice of slavery. The actual author Mattie Griffith, passing as a black, wanted her book to horrify and shame the nation.

Identifying herself as Ann, a former servant woman, she recalls her protected youth and good education as a nearly-white child. She tells that at twelve she was sold to a brutal master named Peterkin. On his Kentucky plantation she witnessed and experienced the cruelty of slave life. After his death one of his daughters took Ann to the city as her servant. Ann found new friendships there and fell in love with Henry, a slave who killed himself after being cheated out of his self-purchase. After being sold to an elderly Bostonian who emancipated her, Ann finishes her story as a schoolteacher for black children.

Pseudo-slave narratives like Griffith's appeared over the course of the abolitionist movement, and this is the only one now in print.

Born in Kentucky, Griffith was by inheritance the owner of six slaves. As a young woman she went north because she loathed the "peculiar institution. " Living in poverty in Philadelphia, Griffith wrote Autobiography of a Female Slave to help finance her effort to emancipate her slaves and resettle them in free territory. She professed a keen knowledge of a slave's daily life and the brutal incidents a slave experienced. From this material she created her fictional story.

The novel failed commercially, although it was hailed within the abolitionist movement. The American Anti-Slavery Society soon afterward gave Griffith the funds to return to Kentucky in order to free and resettle her slaves.