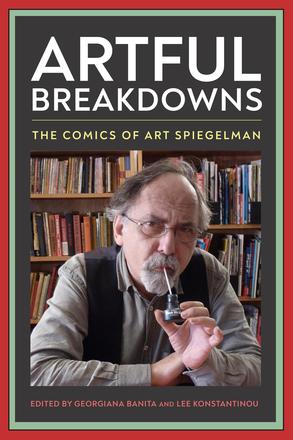 The Comics of Art Spiegelman

The definitive critical appraisal of the great comics artist’s six-decade career as a pioneer, curator, and theorist

A carefully curated, wide-ranging edited volume tracing Art Spiegelman’s exceptional trajectory from underground rebellion to mainstream success, Artful Breakdowns: The Comics of Art Spiegelman reveals his key role in the rise of comics as an art form and of the cartoonist as artist. The collection grapples with Spiegelman’s astonishing versatility, from his irreverent underground strips, influential avant-garde magazine RAW, the expressionist style of the comics classic Maus, the illustrations to the Jazz Age poem “The Wild Party,” and his response to the September 11 terrorist attacks to his iconic cover art for the New Yorker, his children’s books, and various cross-media collaborations.

The twelve chapters cut across Spiegelman’s career to document continuities and ruptures that the intense focus on Maus has obscured, yielding an array of original readings. Spiegelman’s predilection for collage, improvisation, and the potent protest of silence shows his allegiance to modernist art. His cultural critique and anticapitalist, antimilitary positions shed light on his vocal public persona, while his deft intertextual strategies of mixing media archives, from comics to photography and film, amplify the poignance of his works.

Developing new approaches to Spiegelman’s comics—such as the publication history of Maus, the history of immigration and xenophobia, and the cartoonist’s elevation of children’s comics—the collection leaves no doubt that despite the accolades his accessible comics have garnered, we have yet to grasp the full range of Spiegelman’s achievements in the realm of comics and beyond.

"While critical attention to Spiegelman has been extensive, it has also been extremely narrow, with the vast bulk of the critical literature focusing all or in part on Maus. Artful Breakdowns will be the definitive word on Spiegelman’s entire career as artist, editor, and public intellectual."