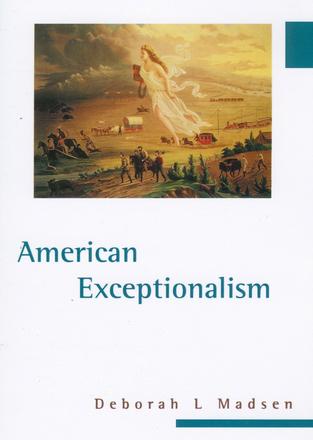 Exceptionalism, the notion that Americans have a distinct and special destiny different from that of other nations, permeates every period of American history. It is the single most powerful force in forming the American identity.

In American Exceptionalism Deborah L. Madsen traces this powerful theory from its origins in Puritan and Revolutionary-era writing to its latest manifestations in the Vietnam conflict and in current films and fiction.

The growth of the idea is complex. In the 1600s the Massachusetts Bay colonists believed that God had intervened to create in America a “redeemer nation,” as is shown in the writings of Mary Rowlandson, William Bradford, and John Cotton. From the perspective of works by Nathaniel Hawthorne and Herman Melville comes the nineteenth-century vision of expansion and dispossession of Native Americans. Later, antislavery writers wielded the rhetoric of exceptionalism against “the peculiar institution.” Recent history of American exceptionalism is revealed in the culture of movie Westerns and revisions of the American myth as shown by the novels of Larry McMurtry, Toni Morrison, and Thomas Pynchon.

Alongside each chapter on American perspectives, Madsen places the counterweight of views from Native Americans, Chicanos, and non-Americans. The result is a balanced and thorough sounding of the New World superpower's legacy to the Old World.

“One has a good sense, from this book,” says Miles Orvell, “that exceptionalism is not to be dismissed or condemned out of hand (as some are wont to do these days) but must be understood in all its complexity, as a source of America's distinct cultural shape, for better or worse. Madsen succeeds in bringing an intelligent detachment and broadly-informed perspective to an issue that is fraught with passion on all sides.”