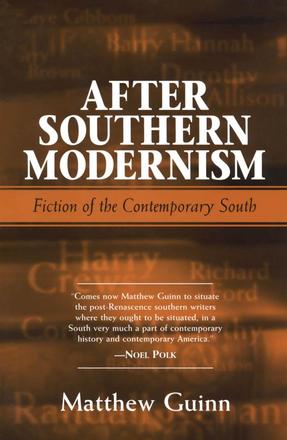 Fiction of the Contemporary South

The literature of the contemporary South might best be understood for its discontinuity with the literary past. At odds with traditions of the Southern Renascence, southern literature of today sharply refutes the Nashville Agrarians and shares few of Faulkner's and Welty's concerns about place, community, and history.

This sweeping study of the literary South's new direction focuses on nine well established writers who, by breaking away from the firmly ensconced myths, have emerged as an iconoclastic generation- -- Harry Crews, Dorothy Allison, Bobbie Ann Mason, Larry Brown, Kaye Gibbons, Randall Kenan, Richard Ford, Cormac McCarthy, and Barry Hannah. Resisting the modernist methods of the past, they have established their own postmodern ground beyond the shadow of their predecessors.

This shift in authorial perspective is a significant indicator of the future of southern writing. Crews's seminal role as a ground-breaking "poor white" author, Mason's and Crews's portrayals of rural life, and Allison's and Brown's frank portrayals of the lower class pose a challenge to traditional depictions of the South. The dissenting voices of Gibbons and Kenan, who focus on gender, race, and sexuality, create fiction that is at once identifiably "southern" and also distinctly subversive. Gibbons's iconoclastic stance toward patriarchy, like the outsider's critique of community found in Kenan's work, proffers a portrait of the South unprecedented in the region's literature. Ford, McCarthy, and Hannah each approach the South's traditional notions of history and community with new irreverence and treat familiar southern topics in a distinctly postmodern manner. Whether through Ford's generic consumer landscape, the haunted netherworld of McCarthy's southern novels, or Hannah's riotous burlesque of the Civil War, these authors assail the philosophical and cultural foundations from which the Southern Renascence arose.

Challenging the conventional conceptions of the southern canon, this is a provocative and innovative contribution to the region's literary study.