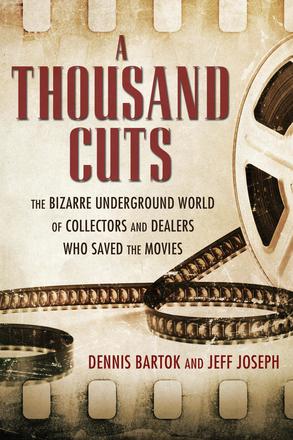 A Thousand Cuts is a candid exploration of one of America's strangest and most quickly vanishing subcultures. It is about the death of physical film in the digital era and about a paranoid, secretive, eccentric, and sometimes obsessive group of film-mad collectors who made movies and their projection a private religion in the time before DVDs and Blu-rays.

Authors Dennis Bartok and Jeff Joseph examine one of the least-known episodes in modern legal history: the FBI's and Justice Department's campaign to harass, intimidate, and arrest film dealers and collectors in the early 1970s. Many of those persecuted were gay men. Victims included Planet of the Apes star Roddy McDowall, who was arrested in 1974 for film collecting and forced to name names of fellow collectors, including Rock Hudson and Mel Tormé.

A Thousand Cuts explores the obsessions of the colorful individuals who created their own screening rooms, spent vast sums, negotiated underground networks, and even risked legal jeopardy to pursue their passion for real, physical film.

These are warm histories of eccentrics, each story by itself a kind of minor-key Moby-Dick. Taken together, they amount to an elegiac portrait of a vanishing filmic subculture.

A real eye-opener . . . this book will provide a much-needed boost to the spirits of movie fans who fear that photographic film--the stuff that comes in rolls--is disappearing from our planet.

Dennis Bartok and Jeff Joseph's A Thousand Cuts: The Bizarre Underground World of Collectors and Dealers Who Saved the Movies describes itself as 'a book about the death of Film' as opposed to the death of The Movies, but make no mistake: this sweeping, warts-and-all survey of the world of private print collecting is far more elegy that paean.

As the use and very existence of physical media continues to dwindle in the modern era, A Thousand Cuts reminds us that many movies would be lost today if not for the obsessive archiving of reels of film by often fascinating individuals. The familiar and detailed ways in which the authors describe their subjects solidifies the connection between aging technology and the aging people who appreciate it.

A Thousand Cuts is a wild, surreal trip down the rabbit hole of obsessive movie love. The rogues' gallery of characters--from Planet of the Apes' Roddy McDowall, to the FBI, to the man who put O. J. Simpson behind bars--is one of the strangest and most fascinating I've come across.

- Adi Shankar, producer of Dredd, The Grey, Power/Rangers Unauthorized [Bootleg Universe], and A Walk Among the Tombstones

A Thousand Cuts reads like a collection of lost Raymond Chandler or Jim Thompson stories, detailing the piracy, theft, and out-of-control passions that led film collectors to hoard these precious prints. Thank God they did--or many treasures would have disappeared.

- Monte Hellman, director of Two-Lane Blacktop, The Shooting, Road to Nowhere, and Cockfighter

A Thousand Cuts is a beautiful elegy for the death of film, that fragile creation of acetate, sprockets, gears, and shadows. Few books have ever captured the singular and mysterious purity of movie worship like this one.

- Adam Simon, executive producer and writer of Salem; writer of The Haunting in Connecticut; and director of The Typewriter, the Rifle, and the Movie Camera

A haunting portrait of a soon-to-be-lost world of hidden film vaults, private movie palaces, and the collectors who fought over their precious film prints. A great read for anyone interested in the underbelly of Hollywood.

I've known Dennis Bartok for many years through his work showing rare films at the American Cinematheque. There's no one better to document this strange subculture literally vanishing before our eyes.

- Mike Hodges, director of Get Carter, Flash Gordon, and Croupier