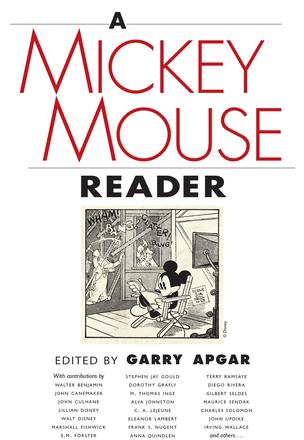 Ranging from the playful, to the fact-filled, and to the thoughtful, this collection tracks the fortunes of Walt Disney's flagship character. From the first full-fledged review of his screen debut in November 1928 to the present day, Mickey Mouse has won millions of fans and charmed even the harshest of critics. Almost half of the eighty-one texts in A Mickey Mouse Reader document the Mouse's rise to glory from that first cartoon, Steamboat Willie, through his seventh year when his first color animation, The Band Concert, was released. They include two important early critiques, one by the American culture critic Gilbert Seldes and one by the famed English novelist E. M. Forster.

Articles and essays chronicle the continued rise of Mickey Mouse to the rank of true icon. He remains arguably the most vivid graphic expression to date of key traits of the American character—pluck, cheerfulness, innocence, energy, and fidelity to family and friends. Among press reports in the book is one from June 1944 that puts to rest the urban legend that “Mickey Mouse” was a password or code word on D-Day. It was, however, the password for a major pre-invasion briefing.

Other items illuminate the origins of “Mickey Mouse” as a term for things deemed petty or unsophisticated. One piece explains how Walt and brother Roy Disney, almost single-handedly, invented the strategy of corporate synergy by tagging sales of Mickey Mouse toys and goods to the release of Mickey's latest cartoons shorts. In two especially interesting essays, Maurice Sendak and John Updike look back over the years and give their personal reflections on the character they loved as boys growing up in the 1930s.

This book does a good job curating particularly significant pieces about the Mouse—from such noted writers as John Canemaker, John Culhane, E. M. Forster, John Updike, M. Thomas Inge, Charles Solomon and our own Jim Korkis, among many others.

The highlights for me are reading the older pieces—with such noted authors as Irving Wallace or a screenwriter like Frank S. Nugent discussing the evolution of Mickey Mouse in the 1940s—written at a time when the maturing studio was still in a ‘golden age. ’ And there is also some real meat here—Arthur Mann's 1934 article for Harper's Magazine on Disney's finances and distribution is a real find.

Just when you think you've read it all, A Mickey Mouse Reader will indeed add to your knowledge of the Disney studio and its most famous creation. This is a good one, and I recommend it.

In his introduction to A Mickey Mouse Reader, editor Garry Apgar advises readers to enjoy the book's segments at random, but I didn't follow his suggestions. I found this much more fascinating to read all the way through.

As someone who rarely lets a quality Disney book or research work go by without devouring it, I found it more fun and interesting to see how the Mickey Mouse phenomenon grew from hot new fad to artistic triumph to passé to dismissible to artistic and important over the decades.

Having read many works that have excerpted selections from many of these essays, it was nice to read them in context, because it really drives home the cultural dynamism of Mickey Mouse and the Disney empire, as well as its effect on those who lived through the various eras. Apgar created a fine assemblage of writings that are a good reference for enthusiasts and perhaps an eye-opener for those who can't understand all the fuss about Mickey.

A Mickey Mouse Reader is a quintessential text for anyone interested in American culture, animation, or Disney studies. Garry Apgar's contribution reminds audiences that what Creighton Peet wrote in 1930 remains true today: 'There is but one Mickey Mouse. Amen. '

A Mickey Mouse Reader is a book that commands attention for many reasons, but not least because it is a continually surprising pleasure to read. There is in the book much that is worth reading for its own sake, and not just as a record of how critical and public sentiment have changed in the more than three-quarters of a century since Mickey's debut. Apgar's own commentary gives the book a reassuring “spine” of informed judgment; that is, his authorial persona—especially his sophistication as a scholar in the visual arts—encourages the reader to accept his choices of what to include in the book. He has taken seriously the job of choosing the contents and as a result has come up with many fascinating items, including some originally published in other languages, that a less industrious compiler would have missed.

- Michael Barrier, author of The Animated Man: A Life of Walt Disney

A Mickey Mouse Reader is a seminal book which will delight both casual Mickey Mouse enthusiasts and Disney history scholars. Thanks to Garry Apgar, no serious research about Mickey will ever be undertaken from this day forward without first absorbing the fascinating content of this delightful book.

My dad referred to Mickey Mouse as 'a little creature dedicated to the purposes of laughter. ' He also advised us to remember that 'It all started with a mouse' . . . the empire that resulted that bears his name. Mickey means different things to different people, and Garry Apgar has compiled a fascinating selection of essays on The Mouse by some very important people. On Mickey's behalf, I am very impressed.