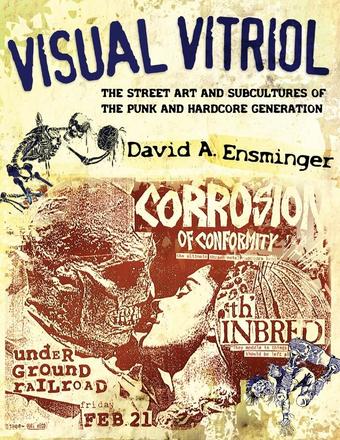 The Street Art and Subcultures of the Punk and Hardcore Generation

By David A. Ensminger

Visual Vitriol: The Street Art and Subcultures of the Punk and Hardcore Generation is a vibrant, in-depth, and visually appealing history of punk, which reveals punk concert flyers as urban folk art. David Ensminger exposes the movement's deeply participatory street art, including flyers, stencils, and graffiti. This discovery leads him to an examination of the often-overlooked presence of African Americans, Latinos, women, and gays and lesbians who have widely impacted the worldviews and music of this subculture. Then Ensminger, the former editor of fanzine Left of the Dial, looks at how mainstream and punk media shape the public's outlook on the music's history and significance.

Often derided as litter or a nuisance, punk posters have been called instant art, Xerox art, or DIY street art. For marginalized communities, they carve out spaces for resistance. Made by hand in a vernacular tradition, this art highlights deep-seated tendencies among musicians and fans. Instead of presenting punk as a predominately middle-class, white-male phenomenon, the book describes a convergence culture that mixes people, gender, and sexualities.

This detailed account reveals how members conceptualize their attitudes, express their aesthetics, and talk to each other about complicated issues. Ensminger incorporates an important array of scholarship, ranging from sociology and feminism to musicology and folklore, in an accessible style. Grounded in fieldwork, Visual Vitriol includes over a dozen interviews completed over the last several years with some of the most recognized and important members of groups such as Minor Threat, The Minutemen, The Dils, Chelsea, Membranes, 999, Youth Brigade, Black Flag, Pere Ubu, the Descendents, the Buzzcocks, and others.

Visual Vitriol is a wide-ranging and open-eyed study that expands and complicates that standard narrative of punk. Ensminger's writing combines the restless energy of a fan with that careful analysis of a scholar. Packed with information, Visual Vitriol will be a valuable resource for cultural historians as well as the next generation of noisemakers and troublemakers. It should also give the experts plenty to argue over.

This masterful study is the definitive book on the legacy of punk street art—the flyers, posters, stencils, graffiti, and gritty do-it-yourself visual culture of punk—analyzed as an urban folk art phenomenon. Ensminger writes with passion, expertise, and a poetic understanding of punk expression, based on his extensive involvement in punk culture. Infused with cultural theory and a street-level folkloric approach, this insightful volume illuminates the raw and unruly creativity of punk, in its wildly diverse manifestations, as understood from the perspective of punks themselves.

Ensminger's book represents the best of the 21st-century approaches to folklore with a lyrical and poignant ethnography that seamlessly interweaves DIY art, first-person experiences, and interviews to create a vivid picture of the powerful cultural tradition we generally think of as 'punk. ' It is required reading for anyone interested in the dynamic life of the punk movement as well as those considering the intersections of media and everyday life more generally.

- Robert Glenn Howard, author of Digital Jesus: The Making of a New Christian Fundamentalist Community on the Internet