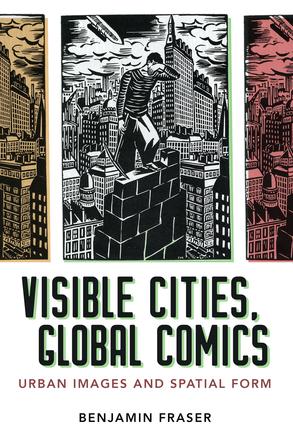 A definitive study on how urban places are reflected in comics

More and more people are noticing links between urban geography and the spaces within the layout of panels on the comics page. Benjamin Fraser explores the representation of the city in a range of comics from across the globe. Comics address the city as an idea, a historical fact, a social construction, a material-built environment, a shared space forged from the collective imagination, or as a social arena navigated according to personal desire. Accordingly, Fraser brings insights from urban theory to bear on specific comics.

Through close readings, each chapter introduces readers to specific comics artists and works and investigates a range of topics related to the medium’s spatial form, stylistic variation, and cultural prominence. Mainly, Fraser mixes interest in urbanism and architecture with the creative strategies that comics artists employ to bring their urban images to life.

"This is a wonderful book to explore how cities are represented in comics. A superb prompt to deeply reflect on the graphic textures of urbanism, urban life, and the material and iconic representation of global cities. A truly delightful work that inspires one to keep loving comics and think about them with spatial passion and the graphic fascination of the urban heart. "

- Ana Merino, professor of Hispanic studies at the University of Iowa

"Benjamin Fraser has written a seminal book. Until now we did not have a study covering the field of comics and the city. Fraser’s book is now offering a comprehensive overview to the relations between the city and the medium of comics, and it also provides deep readings and analyses of selected works. Whatever research will follow approaching the subject of comics and the city, it will all stem from Fraser’s book. "

"Benjamin Fraser has gifted us a path-breaking interdisciplinary study of the way that comics enable us to think through the varied experiences of the urban environment. A truly global study, Fraser transports us from the Sagrada Familia of Barcelona to the streets of São Paolo, from the skylines of New York to the types of fictional cityscapes that only comics can produce. This wide-ranging and deep-diving volume promises to open comics studies to entirely new ways of thinking. "

- Bart Beaty, professor of English at University of Calgary