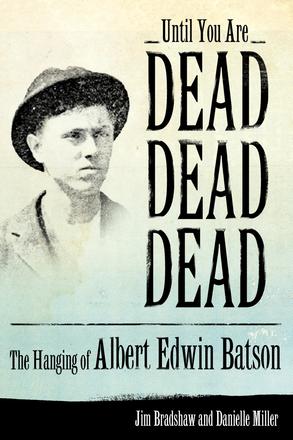 The Hanging of Albert Edwin Batson

In 1902, on a prairie in southwest Louisiana, six members of a farming family are found murdered. Albert Edwin Batson, a white, itinerant farm worker, rapidly descends from likely suspect to likely lynching victim as people in the surrounding countryside lusted for vengeance. In a territory where the locals were coping with the opening of the prairies by the railroad and the disorienting, disruptive advances of the rice and oil industries into what was predominantly cattle country, Batson, an outsider, made an ideal scapegoat.

Until You Are Dead, Dead, Dead tells the story of the legal trials of Batson for the murder of six members of the Earll family and of the emotional trial of his mother. She believed him innocent and worked tirelessly, but futilely, to save her son's life. More than two dozen photos of Batson, his mother, and the principals involved in his arrest and convictions help bring this struggle to life.

Though the evidence against him was entirely circumstantial, most of the citizenry of southwest Louisiana considered him guilty. Sensational headlines in national and local newspapers stirred up so much emotion, authorities feared he would be lynched before they could hang him legally. Even-handed, objective, and thorough, the authors sift the evidence and lament the incompetence of Batson's court-appointed attorneys. The state tried the young man and convicted him twice of the murders and sentenced him each time to death. Louisiana's governor refused to accept the state pardon board's recommendation that Batson's final sentence be commuted to life in prison. A stranger in a rapidly changing land, Batson was hanged.

Until You Are Dead, Dead, Dead asks questions about a long-ago hanging that remain pertinent today. Albert Edwin Batson was judged guilty of six murders more than a century ago by a jury of men who were selected because they believed in capital punishment. That judgment and the ultimate execution of a young man, who consistently professed his innocence, were based solely upon circumstantial evidence. This readable, well-researched examination of his arrest, conviction, and hanging illustrates that the death penalty has presented legal and moral issues for many, many years.

- Sister Helen Prejean, C.S.J., author of Dead Man Walking: An Eyewitness Account of the Death Penalty in the United States

A remarkably vivid early twentieth-century account of one man’s journey through the Louisiana criminal justice system.