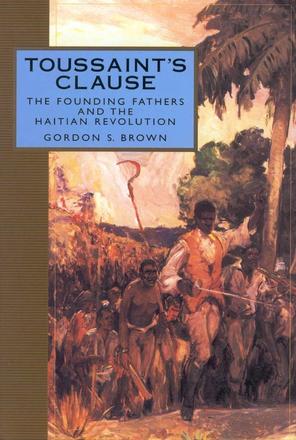 The Founding Fathers and the Haitian Revolution

In its formative years, America, birthplace of a revolution, wrestled with a volatile dilemma. John Adams, Thomas Jefferson, Alexander Hamilton, and many other founding fathers clashed. What was to be the new republic's strategy toward a revolution roiling just off its shores?

From 1790 to 1810, the disagreement reverberated far beyond Caribbean waters and American coastal ports. War between France and Britain, the great powers of the time, raged on the seas and in Europe. America watched aghast as its trading partner Haiti, a rich hothouse of sugar plantations and French colonial profit, exploded in a rebellion led by former slave Toussaint L'Ouverture.

Toussaint's Clause: The Founding Fathers and the Haitian Revolution narrates the intricate history of one of America's early foreign policy balancing acts and one of the nation's defining moments. The supporters of Toussaint's rebellion against France at first engineered a bold policy of intervention in favor of the rebels. But Southern slaveholders, such as Jefferson, eyed the slave-general's rise and masterful leadership skills with extreme alarm and eventually obtained a reversal of the policy-even while taking advantage of the rebellion to make the fateful Louisiana purchase.

Far from petty, the internal squabbles among America's founders resolved themselves in delicate maneuvers in foreign capitals and on the island. The stakes were mortally high-a misstep could have plunged the new, weak, and neutral republic into the great powers' global war. In Toussaint's Clause, former diplomat and ambassador Gordon S. Brown details the founding fathers' crisis over Haiti and their rancorous struggle, which very often cut to the core of what America meant by revolution and liberty.