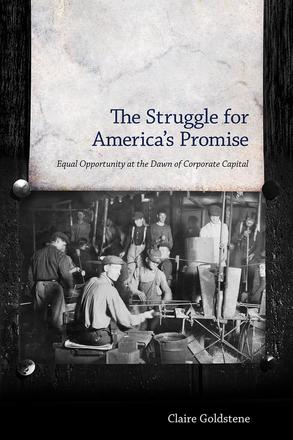 The Struggle for America's Promise

Equal Opportunity at the Dawn of Corporate Capital

In The Struggle for America's Promise, Claire Goldstene seeks to untangle one of the enduring ideals in American history, that of economic opportunity. She explores the varied discourses about its meaning during the upheavals and corporate consolidations of the Gilded Age. Some proponents of equal opportunity seek to promote upward financial mobility by permitting more people to participate in the economic sphere thereby rewarding merit over inherited wealth. Others use opportunity as a mechanism to maintain economic inequality. This tension, embedded with the idea of equal opportunity itself and continually reaffirmed by immigrant populations, animated social dissent among urban workers while simultaneously serving efforts by business elites to counter such dissent.

Goldstene uses a biographical approach to focus on key figures along a spectrum of political belief as they struggled to reconcile the inherent contradictions of equal opportunity. She considers the efforts of Booker T. Washington in a post-Civil War South to ground opportunity in landownership as an attempt to confront the intersection of race and class. She also explores the determination of the Knights of Labor to define opportunity in terms of controlling one's own labor. She looks at the attempts by Samuel Gompers through the American Federation of Labor as well as by business elites through the National Association of Manufacturers and the National Civic Federation to shift the focus of opportunity to leisure and consumption. The Struggle for America's Promise also includes such radical figures as Edward Bellamy and Emma Goldman, who were more willing to step beyond the boundaries of the discourse about opportunity and question economic competition itself.

The Struggle for America's Promise provides an excellent overview of the main strands of thought which pursued the achievement of 'equal opportunity' during the Gilded Age. It brings together the intellectual contributions of a number of key figures within the social and economic context of the Gilded Age, with its tragic and disruptive inequalities. Goldstene portrays individuals and movements struggling to 'make sense' of an economy which no longer 'made sense' by older ways of thought. Scholars in the fields of labor history, American studies, intellectual history, and US social and economic history will all find food for thought here.

An extremely well written work that gives students a handy grip on the variety of experiences in the Gilded Age. Claire Goldstene's terse yet comprehensive new book is a breathtaking balancing act of depth and breadth. Her ingeniously focused chapters spotlight captivating historical figures--Booker T. Washington, Terrence Powderly, Emma Goldman, Samuel Gompers, Edward Bellamy--who cover the waterfront of positions in the often violent struggles that defined the era. She also spotlights organizations that lacked singular leadership. These include: the National Civic Federation, whose members included the era's most famous business, academic, and political leaders, which unblushingly defended monopoly from the evils of 'excessive' business competition; and the People's Party, which dominated state governments in much of the Midwest and South in the early 1890s, and worked, in league with many labor unions against big banks and railroads, in defense of private property and rural, middle-class individualism. Goldstene finds a riveting central theme--equal opportunity--in the propaganda of all parties to the multi-sided conflict. Many students take the ideal of equal opportunity to be self-evidently laudable and uncontroversial, as a modern American article of faith today. But Goldstene makes them see that there have always been many attractive, yet conflicting, ways to define that ideal. She also makes them see that at the dawn of the industrial age, equal opportunity was something people had to fight for, against bitter opposition. Together, her focused chapters make the era manageable for today's harried and often underprepared undergraduates--yet still intellectually stimulating and complex enough to keep the best of them awake and challenged. Goldstene pries, incisively, into the heart of catastrophic developments and upheavals that created a political order that frightens so many students today, with its shrinking opportunities for steady work, and humane retirement options for their folks. Her research is as wide and up to date as anybody in the profession today. With a master storyteller's skills of characterization and an eagle eye for vivid, illuminating quotations, she captures the widest range of experience. She manages, in the manner of Homer, Virgil, and Dante, as much as the greatest social historians of modern times, to tell a thrilling story of dramatic human conflict without oversimplification or partisanship.

- David L. Chappell, Rothbaum Professor of Modern U.S. History, University of Oklahoma, and author of Waking from the Dream: The Struggle for Civil Rights in the Shadow of Martin Luther King

What could be timelier than a historical study of the ideology of equal opportunity and the growth of inequality in the United States? Set in the Gilded Age, an era when the contradictions in the claims about equal opportunity were becoming impossible to ignore, The Struggle for America's Promise illuminates the ways in which a range of public figures responded by engaging, criticizing, and re-working the notion of equal opportunity. Claire Goldstene unflinchingly scrutinizes the implicit under side of this ideology—inequality of outcomes—and the quandary this posed both for those seeking to justify the new economic order and for those committed to greater social justice. This book should become required reading for every history student in America.