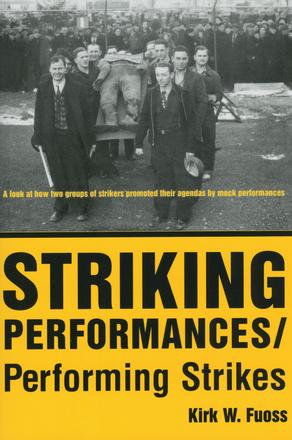 A look at how two groups of protesters promoted their agendas by mock performances.

In the 1930s two protest groups gained the public eye by role playing. They brought their social grievances to attention in their communities by staging mock performances. In this fascinating study of two strikes, Kirk W. Fuoss reports how the novel incidents of these protests unite the seemingly opposing forces of community and contestation.

The two extended case studies-the Workers Alliance of America's 1936 takeover of the New Jersey State Assembly and the General Motors sitdown strike of 1936-37-illustrate group interdependence rather than opposition and demonstrate the irony of fostering a sense of community while fomenting conflict.

The New Jersey case rose out of the state's depletion of relief appropriations and the cutting off of payments to the unemployed. As a result, the state branch of the union seized the State Assembly and for ten days staged a "pauper's parliament" in which members alternately performed roles of ideal legislators and parodied the actual legislators.

These two case studies show how the theatrical stagings by strikers threw the spotlight of public attention on their causes.