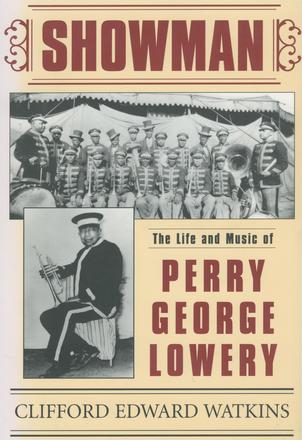 The Life and Music of Perry George Lowery

Long before the recognized birth of ragtime and jazz such hard-working travelers as Perry George Lowery blew their horns and led their bands throughout America, shaping the sound of modern music while performing in cities and towns across the nation.

An exhausting on-the-road life caused Lowery's name to fade from music history. Even after dazzling America as a marquee soloist and the leader of minstrel and circus bands, Lowery (1870-1942) ended up in an unmarked grave in Cleveland, Ohio.

This biography, the only book-length study of this groundbreaking African American cornet player, resurrects his name. It is the story of a quiet maverick who became the standard that shook American music.

Lowery came from hardscrabble black settlers in Kansas. His family created an environment in which he could develop his musical talent. His life follows the evolution of American music via the circus, minstrelsy, and the vaudeville stage. From 1895 through 1942, he made his name not only as a musician but also as an author, columnist, teacher, showman, and entrepreneur. H. C. Brown of the Boston Conservatory called him the "World's Greatest Colored Cornet Soloist. "

A road-weary show veteran, Lowery landed a spot in the Ringling Brothers Sideshow Band at the height of the golden age of circuses.

At a time when the nation slammed the doors on African American travel and opportunity, his work with the Ringling Brothers changed the music scene. By 1910, as a result of his performances, there were fourteen circus acts that employed African American bands.

Clifford Edward Watkins is professor of music at North Carolina A&T State University in Greensboro. His work has been published in the Encyclopedia of African-American Culture and Feel the Spirit: Studies in Nineteenth-Century Afro-American Music.