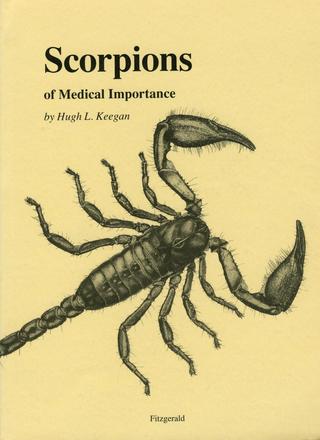 An account of the many stinging arachnids that have medical impact

This publication is an account of the distribution, morphology, biology and classification of those scorpions considered to be of medical importance. The book also contains information on the clinical aspects of scorpion envenomation, and on methods for scorpion control.

Though the scope of this book is clearly delineated by its title, Scorpions of Medical Importance, Professor Keegan does consider those genera and species of scorpions that are not of medical importance, but commonly occur in association with man, and are often greatly feared. He has done so because of the scorpion's potential as a stimulus for entomophobia. While this fear, created in part by folklore, dramatic but inaccurate literature, and television and motion picture sequences, is useful in areas where dangerously venomous scorpions exist, it has also created much needless apprehension. It will surely be a revelation to many readers that of approximately 800 species that have been described, only about 50 have been reported as being dangerous to man.

A valuable feature of Scorpions of Medical Importance is the outstanding drawings that have been used to illustrate the species. It is not often that one comes across drawings so striking in their precision and attention to even the most minute details.

As one of the very few books dealing solely with the general subject of scorpions of medical importance, this publication should be a useful reference for all of those interested in the distribution, biology, and control of dangerously venomous scorpions, and in clinical aspects of scorpion envenomation. The book also contains an index, bibliography, and pertinent references to related species not discussed in the book.