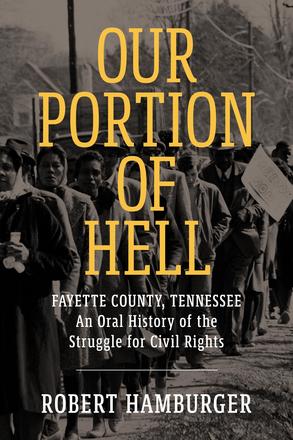 Fayette County, Tennessee: An Oral History of the Struggle for Civil Rights

Our Portion of Hell: Fayette County, Tennessee: An Oral History of the Struggle for Civil Rights offers an unrivalled account of how a rural Black community drew together to combat the immense forces aligned against them. Author Robert Hamburger first visited Fayette County as part of a student civil rights project in 1965 and, in 1971, set out to document the history of the grassroots movement there.

Beginning in 1959, Black residents in Fayette County attempting to register to vote were met with brutal resistance from the white community. Sharecropping families whose names appeared on voter registration rolls were evicted from their homes and their possessions tossed by the roadside. These dispossessed families lived for months in tents on muddy fields, as Fayette County became a “tent city” that attracted national attention. The white community created a blacklist culled from voter registration rolls, and those whose names appeared on the list were denied food, gas, and every imaginable service at shops, businesses, and gas stations throughout the county.

Hamburger conducted months of interviews with residents of the county, inviting speakers to recall childhood experiences in the “Old South” and to explain what inspired them to take a stand against the oppressive system that dominated life in Fayette County. Their stories, told in their own words, make up the narrative of Our Portion of Hell.

This reprint edition includes twenty-nine documentary photographs and an insightful new afterword by the author. There, he discusses the making of the book and reflects upon the difficult truth that although the civil rights struggle, once so immediate, has become history, many of the core issues that inspired the struggle remain as urgent as ever.

"Like an exquisite documentary film, Robert Hamburger seamlessly connects oral history interviews with narrative history to present the neglected story of the indigenous civil rights movement in Fayette County, Tennessee. The reissuing of this important book, first published in 1973, could not have come at a more appropriate time as this nation continues to struggle to complete the egalitarian work started by the brave people of Fayette County in the face of renewed political and economic obstacles."

"The civil rights movement in Fayette County, Tennessee, is a story of extraordinary courage by African Americans who in 1959 mobilized their community to demand voting rights and full citizenship. These activists demonstrated steely resolve and experienced hardship, losses, and wins that enabled them and subsequent generations of African Americans to vote and to access educational, economic, and other opportunities. Today, this story should inspire African Americans and others who are fighting to preserve and expand rights while facing opposition by those determined to return America to a darker time in history."

- Daphene R. McFerren, daughter of Fayette County activists John and Viola McFerren and executive director of the Benjamin L. Hooks Institute for Social Change at the University of Memphis