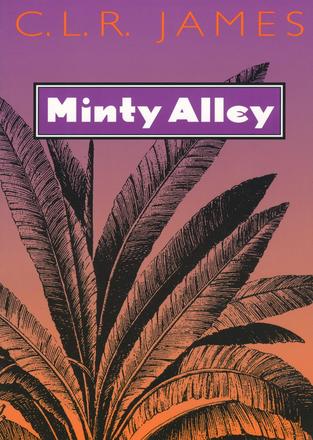 First published in London in 1939, Minty Alley is now available to American readers. In the pages of this work, C. L. R. James is both an imaginative political theorist and a sensitive commentator on the West Indian social and cultural scene.

James's novel has been acclaimed as "a groundbreaking example of regional social realism" and as "a major forerunner of the Caribbean literary movements in English. " Many of James's readers believe that it is not possible fully to comprehend Caribbean literary art in English without first reading Minty Alley. In the interactions of the characters of Maisie, Haynes, Mrs. Rouse, and Benoit, James discerns new forms of society rooted in the oldest of desires and aspirations. In the everyday language of the unforgettable dialogues in the novel James reveals new modes of human relationships.

Haynes, a young middle-class lodger at No. 2 Minty Alley, becomes both confidant and judge as he examines the other inhabitants at this address. From his experiences, he realizes the mutually impoverishing alienation of the educated West Indian from the mainstream. Through Haynes's vivid narration, James presents the rich cultural life on Minty Alley. Haynes, an outsider among people of lower class, knows his fellow lodgers only as they have revealed themselves to him through their speech and actions, yet each has a mysterious inner life.

Frequently reprinted in the United Kingdom, Minty Alley at last reaches the United States so that American readers can learn what much of the rest of the English-speaking world has long known, that before such masterworks as The Black Jacobins, World Revolution, and Beyond a Boundary, C. L. R. James had already made his mark as one of the foremost of West Indian novelists.