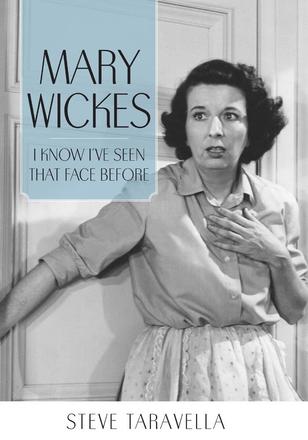 I Know I've Seen That Face Before

The full story of one of Hollywood's most accomplished character actresses

Moviegoers know her as the housekeeper in White Christmas, the nurse in Now, Voyager, and the crotchety choir director in Sister Act. This book, filled with never-published behind-the-scenes stories from Broadway and Hollywood, chronicles the life of a complicated woman who brought an assortment of unforgettable nurses, nuns, and housekeepers to life on screen and stage.

Wickes (1910–1995) was part of some of the most significant moments in film, television, theatre, and radio history. On that frightening night in 1938 when Orson Welles recorded his earth-shattering “War of the Worlds” radio broadcast, Wickes was waiting on another soundstage for him for a rehearsal of Danton's Death, oblivious to the havoc taking place outside.

When silent film star Gloria Swanson decided to host a live talk show on this new thing called television, Wickes was one of her first guests. When Lucille Ball made one of her first TV appearances, Wickes appeared with her—and became Lucy's closest friend for more than thirty years. Wickes was the original Mary Poppins, long before an umbrella carried Julie Andrews across the rooftops of London. And when Disney began creating 101 Dalmatians, Wickes was asked to pose for animators trying to capture the evil of Cruella De Vil.

The pinched-face actress who cracked wise by day became a confidante to some of the day's biggest stars by night, including Bette Davis and Doris Day. Bolstered by interviews with almost three hundred people, and by private correspondence from Ball, Davis, Day, and others, Mary Wickes: I Know I've Seen That Face Before includes scores of never-before-shared anecdotes about Hollywood and Broadway. In the process, it introduces readers to a complex woman who sustained a remarkable career for sixty years.

"Divulging the kind of insider details that entertainment buffs adore, Taravella delivers a scholarly, affectionate, and vivid biography of a legendary actress. "

"This is a straightforward biography that celebrates and shines a light on a woman who Hollywood never took seriously. Her friendships with various Hollywood hoi polloi, including a long-standing friendship with Lucille Ball, are a tender chapter in the book, and Ball's daughter Lucie Arnaz's recollections will cause tears to well up. Biographies about lesser-known actors are always fascinating because you never know what to expect. Taravella doesn't stoop to naming names or providing salacious gossip. He wants to give you insight on a woman who made people laugh but who never got her due. "

"Highly recommended. The biography is incredibly well-researched, and it is obvious that Taravella put an immense amount of work into providing readers as thorough an understanding of Mary Wickes as possible. Mary Wickes: I Know I've Seen That Face Before is filled with interesting anecdotes about Wickes's career that may be wholly unfamiliar to her many fans. "