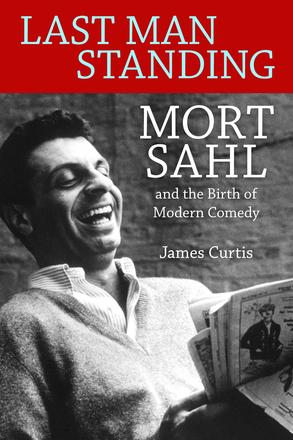 Mort Sahl and the Birth of Modern Comedy

A Times Literary Supplement 2017 Book of the Year

On December 22, 1953, Mort Sahl (1927–2021) took the stage at San Francisco's hungry i and changed comedy forever. Before him, standup was about everything but hard news and politics. In his wake, a new generation of smart comics emerged—Shelley Berman, Mike Nichols and Elaine May, Lenny Bruce, Bob Newhart, Dick Gregory, Woody Allen, and the Smothers Brothers, among others. He opened up jazz-inflected satire to a loose network of clubs, cut the first modern comedy album, and appeared on the cover of Time surrounded by caricatures of some of his frequent targets such as Dwight Eisenhower, Richard Nixon, Adlai Stevenson, and John F. Kennedy. Through the extraordinary details of Sahl's life, author James Curtis deftly illustrates why Sahl was dubbed by Steve Allen as “the only real political philosopher we have in modern comedy. ”

Sahl came on the scene the same year Eisenhower and Nixon entered the White House, the year Playboy first hit the nation's newsstands. Clad in an open collar and pullover sweater, he adopted the persona of a graduate student ruminating on current events. “It was like nothing I'd ever seen,” said Woody Allen, “and I've never seen anything like it after. ” Sahl was billed, variously, as the Nation's Conscience, America's Only Working Philosopher, and, most tellingly, the Next President of the United States. Yet he was also a satirist so savage the editors of Time once dubbed him “Will Rogers with fangs. ”

Here, for the first time, is the whole story of Mort Sahl, America's iconoclastic father of modern standup comedy. Written with Sahl's full cooperation and the participation of many of his friends and contemporaries, it delves deeply into the influences that shaped him, the heady times in which he soared, and the depths to which he fell during the turbulent sixties when he took on the Warren Commission and nearly paid for it with his career.

"James Curtis captures the dueling sides of Sahl’s persona in Last Man Standing, his fair-minded new biography. He meticulously charts his subject’s path from striving club comic to mercurial star. Coupled with deep dives into the morgues of Hollywood trade magazines, Curtis’s interviews with the likes of Woody Allen, Dick Cavett and Sahl himself (he turned 90 this year) give the reader a clear sense of his nimble mind and his influence on younger talents"

"In an entertaining, abundantly . . . detailed biography, Curtis, biographer of Spencer Tracy, Preston Sturges, and W. C. Fields, makes a strong case for Sahl's influence. For Woody Allen, Sahl opened up 'a whole new style of humor' that led him to become a performer rather than just a writer. Dick Cavett called Sahl's performances 'stunning. ' Among early admirers were Jack Benny, Groucho Marx, and Milton Berle. . . . A sympathetic, evenhanded biography of a man notorious for his savage wit. "

"He changed the game forever and he’s still playing. He gets his due and more in a terrific new book by James Curtis, who rightly subtitles the first full-length biography of Sahl Last Man Standing, with this: ‘Mort Sahl and the Birth of Modern Comedy. ’ That’s no hyperbole. "

"James Curtis's biography Last Man Standing: Mort Sahl and the Birth of Modern Comedy makes a vivid reminder of Sahl's originality, including jokes and those one-liners, issued in medias res, that carried an unmistakable sting and signature. "

"Curtis's book is an extraordinarily granular chronicle of Sahl's career. "

"James Curtis offers a comprehensive and generally admiring biography of Mort Sahl. . . . Last Man Standing is a thoughtful and exhaustive account of the life of Mort Sahl, once dubbed by Time as 'Will Rogers with fangs. '"

"James Curtis has superbly chronicled the emergence and career of a comic genius who revolutionized standup comedy and changed it forever. If you weren't there at the time, it's hard to realize the enormity of the impact Mort Sahl had on America—both as writer and performer—and this book takes you through it in an exciting narrative that teems with examples of Mort's dazzling wit. "

"Mort Sahl has never found a truth he wouldn't tell or a bridge he wouldn't torch. He's brilliant, he's insufferable, he's the living connection to Bill Hicks, Bill Maher, and all the other modern comics whose purpose goes deeper than extracting laughs. It's a life without compromise, almost fatally so, and James Curtis's Last Man Standing is as unflinching as its subject. It's a great book about a great comedian. "

- Scott Eyman, author of John Wayne: The Life and Legend

"The book is a triumph. Of prose style, engrossing, lively story-telling, and emotionally moving incidents in that complex genius's strange and dramatic life. Also, once you put it down, you can pick it up—for re-reading. All books should be so good. "

"Last Man Standing is a magnificent, flawless, and perceptive biography of the great Mort Sahl. I loved the book and laughed out loud as I read it. "