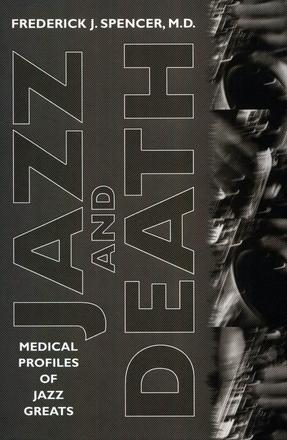 When a jazz hero dies, rumors, speculation, gossip, and legend can muddle the real cause of death.

Divided into disease categories, it covers such illnesses as ALS (Lou Gehrig's Disease), which killed Charlie Mingus, and tuberculosis, which caused the deaths of Chick Webb, Charlie Christian, Bubber Miley, Jimmy Blanton, and Fats Navarro. It notes the significance of dental disease in affecting a musician's embouchure and livelihood, as happened with Joe "King" Oliver. A discussion of Art Tatum's visual impairment leads to discoveries in the pathology of what blinded Lennie Tristano.

Heavy drinking, even during Prohibition, was the norm in the clubs of New Orleans and Kansas City and in the ballrooms of Chicago and New York. Too often, the musical scene demanded that those who play jazz be "jazzed. "

After World War II, as heroin addiction became the hallmark of revolution, talented bebop artists suffered long absences from the bandstand. Many did jail time, and others succumbed to the ravages of "horse. "

With Jazz and Death, the causes behind the great jazz funerals may no longer be misconstrued. Its clinical and morbidly entertaining approach creates an invaluable compendium for jazz fans and scholars alike.

Frederick J. Spencer is a professor and associate dean emeritus of the School of Medicine (Medical College of Virginia) at Virginia Commonwealth University. He has been published in the New England Journal of Medicine, Journal of the American Medical Association, American Journal of Public Health, and Modern Medicine, among other publications.