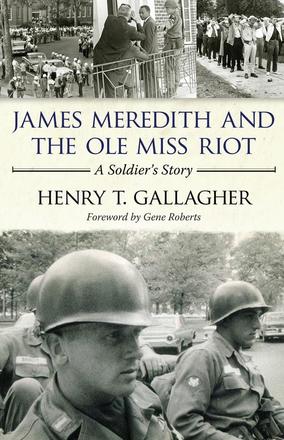 In September 1962, James Meredith became the first African American admitted to the University of Mississippi. A milestone in the civil rights movement, his admission triggered a riot spurred by a mob of three thousand whites from across the South and all but officially stoked by the state's segregationist authorities. Historians have called the Oxford riot nothing less than an insurrection and the worst constitutional crisis since the Civil War. The escalating conflict prompted President John F. Kennedy to send twenty thousand regular army troops, in addition to federalized Mississippi National Guard soldiers, into the civil unrest (ten thousand into the town itself) to quell rioters and restore law and order.

James Meredith and the Ole Miss Riot is the memoir of one of the participants, a young army second lieutenant named Henry Gallagher, born and raised in Minnesota. His military police battalion from New Jersey deployed, without the benefit of riot-control practice or advance briefing, into a deadly civil rights confrontation. He was thereafter assigned as the officer-in-charge of Meredith's security detail at a time when he faced very real threats to his life.

Gallagher's first-person account considers the performance of his fellow soldiers before and after the riot. He writes of the behavior of the white students, some of them defiant, others perceiving a Communist-inspired Kennedy conspiracy in Meredith's entry into Mississippi's "flagship" university. The author depicts the student, Meredith, a man who at times seemed disconnected with the violent reality that swirled around him, and who even aspired to be freed of his protectors so that he could just be another Ole Miss student.

James Meredith and the Ole Miss Riot is both an invaluable perspective on a pivotal moment in American history and an in-depth look at a unique home-front military action. From the vantage of the fiftieth anniversary of the riot, Henry T. Gallagher reveals the young man he was in the midst of one of history's most profound tests, a soldier from the Midwest encountering the powder keg of the Old South and its violent racial divisions.

Henry Gallagher has given us a valuable new perspective on the 1962 Ole Miss crisis--an extraordinary tale of how men, unrelated to the drama yet committed to duty, found their way to Oxford to help break the siege at the Lyceum and to provide protection for the school's first black student.

- UPMCurtis Wilkie, author of The Fall of the House of Zeus

An army unit sent to quell a riot with all they need but a map to find the place, so a rookie lieutenant kidnaps a Navy seaman to guide them--it reads like fiction, but it's all true, and Henry Gallagher tells it as only someone who was part of it could. A well-researched and fascinating new take on one of the turning points in the civil rights movement which makes for a very good read.

Henry Gallagher was one of the key players in an astonishing moment in U. S. history. . . . In this electrifying narrative, he gives us a vivid glimpse of the courage of a brother American soldier, the remarkable crusader James Meredith.

Other Books By Henry T. Gallagher or Gene Roberts