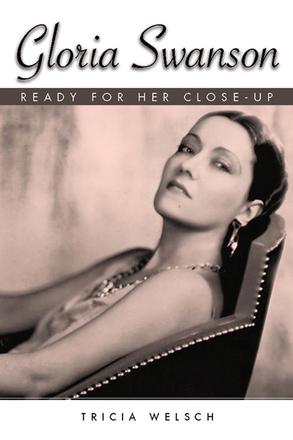 Ready for Her Close-Up

A biography of the "Queen of Hollywood" and her decades of successes and comebacks in film, art, fashion, and journalism

Gloria Swanson: Ready for Her Close-Up shows how a talented, self-confident actress negotiated a creative path through seven decades of celebrity. It also illuminates a little-known chapter in American media history: how the powerful women of early Hollywood transformed their remarkable careers after their stars dimmed. This book brings Swanson (1899-1983) back into the spotlight, revealing her as a complex, creative, entrepreneurial, and thoroughly modern woman.

Swanson cavorted in slapstick short films with Charlie Chaplin and Mack Sennett in the 1910s. The popularity of her films with Cecil B. DeMille helped create the star system. A glamour icon, Swanson became the most talked-about star in Hollywood, earning three Academy Award nominations, receiving 10,000 fan letters every week, and living up to a reputation as Queen of Hollywood. She bought mansions and penthouses, dressed in fur and feathers, and flitted through Paris, London, and New York engaging in passionate love affairs that made headlines and caused scandals.

Frustrated with the studio system, Swanson turned down a million-dollar-a-year contract. After a wild ride making unforgettable movies with some of Hollywood's most colorful characters--including her lover Joseph Kennedy and maverick director Erich von Stroheim--she was a million dollars in debt. Without hesitation she went looking for her next challenge, beginning her long second act.

Swanson became a talented businesswoman who patented inventions and won fashion awards for her clothing designs; a natural foods activist decades before it was fashionable; an exhibited sculptor; and a designer employed by the United Nations. All the while she continued to act in films, theater, and television at home and abroad. Though she had one of Hollywood's most famous exit lines--"All right, Mr. DeMille, I'm ready for my close-up"--the real Gloria Swanson never looked back.

I am so glad that Gloria Swanson is at last receiving the attention she deserves.

- Kevin Brownlow, author of The Parade's Gone By. . ., filmmaker, and Academy Award recipient for his contributions to film scholarship and film preservation

If Gloria Swanson was ready for her close-up, Tricia Welsch proves more than ready to take it. Drawing from an astonishing array of materials, Welsch deftly shows that there was much, much more to Swanson than the silent era's most glamorous (and fashionable) female star or the Norma Desmond vampire of Sunset Boulevard. Gloria Swanson: Ready for Her Close-Up provides a lively, deft, and full account of Swanson's pioneering career and personal life, both of which were informed by a spirit of constant, intrepid reinvention. Welsch has given us the definitive biography of one of the major figures of the performing arts in the twentieth century.

Gloria Swanson was, beyond doubt, the brightest star in Hollywood's glittering firmament for many decades, beginning in the era of silent films, continuing well into the postwar period. To a surprising degree, she understood and manipulated the idea of celebrity with an almost incalculable sense of entrepreneurship, managing to survive in a medium challenged, then as now, by rapid technological shifts. Tricia Welsch shows us why the whole world loved her in this sparky, intelligent, and deeply researched biography. A brilliant study of this iconic figure.

- Jay Parini, author of The Last Station: A Novel of Tolstoy's Final Year