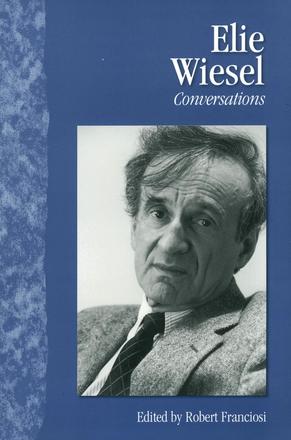 Elie Wiesel has given hundreds of interviews. Yet his fame as a human rights advocate often directs such conversations toward non-literary issues. Indeed, many of Wiesel's questioners barely address the writer's role that has defined him since the 1950s.

Unlike previous volumes in which he speaks with interviewers, Elie Wiesel: Conversations collects interviews which set in relief the writer at work. This book focuses on Wiesel the literary artist instead of Wiesel the Holocaust survivor or the 1986 Nobel Peace Prize laureate.

Beyond highlighting Wiesel's literary significance, these interviews also correct many faulty assumptions about his achievement. Few American readers know that he writes in French, that he has been favorably compared to Andr&eacute; Malraux and Albert Camus. Not many realize that the Holocaust has been the subject of only a few of his forty books. Particularly in his nonfiction, Wiesel's scope is wide, addressing Jewish life in all its religious and historical complexity.

Though most of Wiesel's books do not focus on the Holocaust, they are written against the backdrop of what he has come to term "The Event. " Always, the presence of Auschwitz can be felt, always the author "lives in the shadows of the flames that once illuminated and blinded him. "

These interviews are reminders that the writing life is both solitary and public, interior and social. The writer must venture beyond his study and speak out against the world's traumas and outrages.

Robert Franciosi is an associate professor of English at Grand Valley State University in Allendale, Mich. He is the editor of Good Morning: A Holocaust Memoir. His work has appeared in American Poetry, Contemporary Literature, Modern Jewish Studies, and the William Carlos Williams Review.