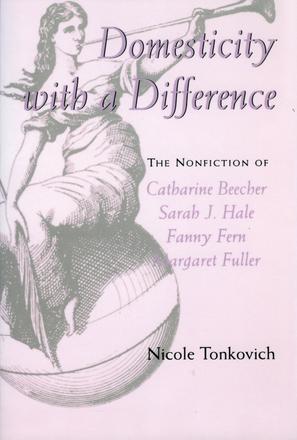 Domesticity with a Difference

This study of nonfiction written by four of nineteenth-century America's first professional women writers investigates the paradoxes posed by the conflict of their texts with their lives. They were not homemakers, yet in their works they prescribed ideal domesticity for the women of their day. They were not professional educators, yet they wrote authoritatively about educational theory and practice. They were not involved with organized political agitation for women's rights, yet their writings advanced thoughtful, radical revisions to existing social and political structures, particularly the heterosexual family. Comparable home, school, and community backgrounds prepared Catharine Beecher, Sarah Josepha Hale, Fanny Fern, and Margaret Fuller to write for the public. Their nonfiction texts expose the contradictions between what they prescribed for other women and how they themselves chose to live outside the traditional domestic world. Class, race, age, and geography determined the focus of nineteenth-century women's writing, and as Hale, Beecher, Fern, and Fuller promoted and critiqued one another, they profited reciprocally from the others' work, teachings, and examples. As this study shows, by attending to details of womanly behavior such as language, dress, and manners, their writings contributed to altering women's traditional roles in home, school, and community. No previous study has grouped Hale, Beecher, Fern, and Fuller together because each promoted differing political goals. While respecting these differences, this focus on their nonfiction reveals their strong professional links and demonstrates the similar effects of their writings, which prescribed domesticity for the lives of other women while justifying their own professionalism.