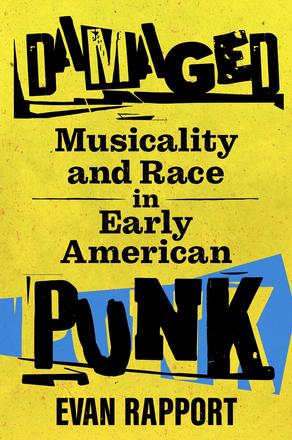 Damaged: Musicality and Race in Early American Punk is the first book-length portrait of punk as a musical style with an emphasis on how punk developed in relation to changing ideas of race in American society from the late 1960s to the early 1980s. Drawing on musical analysis, archival research, and new interviews, Damaged provides fresh interpretations of race and American society during this period and illuminates the contemporary importance of that era.

Evan Rapport outlines the ways in which punk developed out of dramatic changes to America’s cities and suburbs in the postwar era, especially with respect to race. The musical styles that led to punk included transformations to blues resources, experimental visions of the American musical past, and bold reworkings of the rock-and-roll and rhythm-and-blues sounds of the late 1950s and early 1960s, revealing a historically oriented approach to rock that is strikingly different from the common myths and conceptions about punk. Following these approaches, punk itself reflected new versions of older exchanges between the US and the UK, the changing environments of American suburbs and cities, and a shift from the expressions of older baby boomers to that of younger musicians belonging to Generation X. Throughout the book, Rapport also explores the discourses and contradictory narratives of punk history, which are often in direct conflict with the world that is captured in historical documents and revealed through musical analysis.

"In Damaged. Rapport (ethnomusicology, THe New School) challeneges many assumptions and miscomception--historical and musical--about punk. One is the idea that punk is ahistorical, a critique sometimes applied to white privilege. Rapport upends this view of punk history ny demonstrating how in early punk, baby boomer (primarily white) musicians growing up in suburbs reinterpreted Black American blues and British blues-based music. The author traces this musical development geographically and chronologically, from postwar Northern, Midwestern, and West Coast cities depressed by white flight in the 1960s and 1970s to the development of hardcore punk on the West Coast and its maturation in Washington, DC and New York City in the 1980s. He shows how punk has historically been music produced primarily by white people to criticize and sometimes reinforce their privilege and the ways these dynamics manifest themselves in the manipulation of Black American discourses and musical forms. Though Rapport also considers the experiences of Latinx, Asian-American, and LGBTQ punk, he primarily focuses on white assimilation of Black music in early punk, a tendency that reified racist binaries white punks often tried to dismantle. Musically literate readers will apprecaite the technical sections of this book."

"There’s a whole lot to this book, but what impresses me the most about Damaged is that Evan Rapport does something seemingly obvious but surprisingly rare: he actually analyzes and explains punk music as MUSIC. Read with the headphones on!"

"An intense read! Evan Rapport creates a complex tapestry connecting the musical and societal dots where others might never have tried. He helps us with how a musical style like punk evolved and the positive and negative nature of all of us in the context of our musical scene."

"From Beefheart to Black Flag, Evan Rapport's brilliant new book brings a musicologist's precision and insight to punk's early years, tracing in lucid detail both its evolution from and reaction to the blues, African American history, and the idea of blackness. Essential reading for anyone curious about punk's complex and contradictory relationship to race in America."

"Pioneering and provocative, this extraordinarily musical study chronicles the spread of punk across America, capturing its jagged insolence, unapologetic musicality, and eye-opening complexity. Accessible and deeply expressive, Damaged powerfully recasts how we understand this musical revolution through spirited engagement with the fulcrum of race in the United States."

"Damaged by Evan Rapport is a layered and enlightening read. Paying scrupulous attention to musical sound, Rapport traces the often unacknowledged black American musical sources that influenced early American punk, while also providing a socially and historically grounded analysis of the complex dynamics of race, class, and generation that unfolded in punk scenes in New York, Los Angeles, and Washington, DC, during the 1970s and 1980s."

- Maureen Mahon, author of Right to Rock: The Black Rock Coalition and the Cultural Politics of Race and Black Diamond Queens: African American Women and Rock and Roll

"A landmark study of the genre, Rapport refreshes our ears to the ways in which punk transformed popular music and the culture from which it emerged—a provocation, as he convincingly argues, that continues to resonate."

- Kevin Fellezs, author of Birds of Fire: Rock, Jazz, Funk, and the Creation of Fusion and Listen but Don’t Ask Question: Hawaiian Slack Key Guitar across the TransPacific

"Context is truly everything, and Damaged gives us context and then some: by tying together powerful discussions of race, place, and yes, the MUSIC, Evan Rapport gives anyone interested in punk and popular music of the 1970s a novel and powerful point of view on how punk as a genre and punk as a style came to be and how its influence has persisted."

- Daniel Goldmark, author of Tunes for ’Toons and The Grove Music Guide to American Film Music